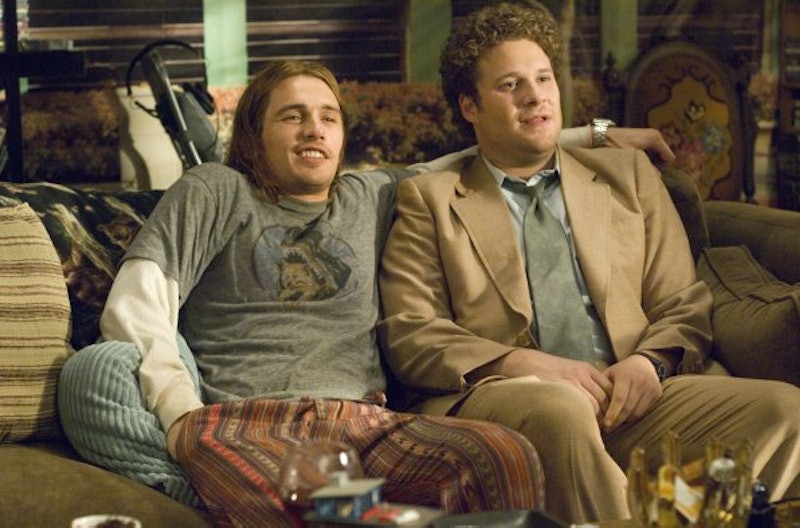 As you may have heard, New York Times columnist Maureen Dowd tried out edible marijuana as research for a piece about the drug's legalization in Colorado and things didn't go so well. By which I mean, she ate too much, got extremely paranoid, and thought she "had died and no one was telling [her]." Dowd wrote up her experience in an article titled, "Don't Harsh Our Mellow, Dude" and it is quite the tale. There's memories of her childhood, an eight hour-long hallucination, and a particularly haunting part about a pair of green corduroys.

It seems that Dowd's bad experience came from being outside of her "therapeutic window" which is to say she had an adverse reaction after ingesting too much THC for her tolerance. Even though Dowd thought she was dying at one point, she came out of the experience just fine and in addition to writing about her, um, adventure, she wrote about the benefits and problems Colorado has seen in the time since legalizing marijuana.

Because Dowd's story was a big one this week and because she documented her experience in such a colorful way, she was the natural choice for this week's character reaction. And who's reacting you ask? It's gotta be a fellow stoner, right? How about two! Here's Pineapple Express' Saul Silver and Dale Denton reacting to Maureen Dowd's issues with edibles.

"The caramel-chocolate flavored candy bar looked so innocent, like the Sky Bars I used to love as a child."

"Sitting in my hotel room in Denver, I nibbled off the end and then, when nothing happened, nibbled some more."

"What could go wrong with a bite or two? Everything, as it turned out."

"Not at first. For an hour, I felt nothing. I figured I’d order dinner from room service and return to my more mundane drugs of choice, chardonnay and mediocre-movies-on-demand."

"But then I felt a scary shudder go through my body and brain. I barely made it from the desk to the bed, where I lay curled up in a hallucinatory state for the next eight hours."

"I strained to remember where I was or even what I was wearing, touching my green corduroy jeans and staring at the exposed-brick wall."

"As my paranoia deepened, I became convinced that I had died and no one was telling me."

"It took all night before it began to wear off, distressingly slowly. The next day, a medical consultant at an edibles plant where I was conducting an interview mentioned that candy bars like that are supposed to be cut into 16 pieces for novices; but that recommendation hadn’t been on the label."

More like this
'Wednesday' Star Emma Myers Thinks A Wenclair Storyline Is “Possible” In Season 2
By Alyssa Lapid
Jessica Simpson On The Time She Was Pursued By A Backstreet Boy & An *NSYNC Member
By The Editors
Netflix Shut Down 'Bridgerton' S3 Rumours About A “Very Dark” Storyline
By Bustle
We’ve Entered The Hot Boy Reader Era
By Samantha Leach
Get Even More From Bustle — Sign Up For The Newsletter
From hair trends to relationship advice, our daily newsletter has everything you need to sound like a person who’s on TikTok, even if you aren’t.