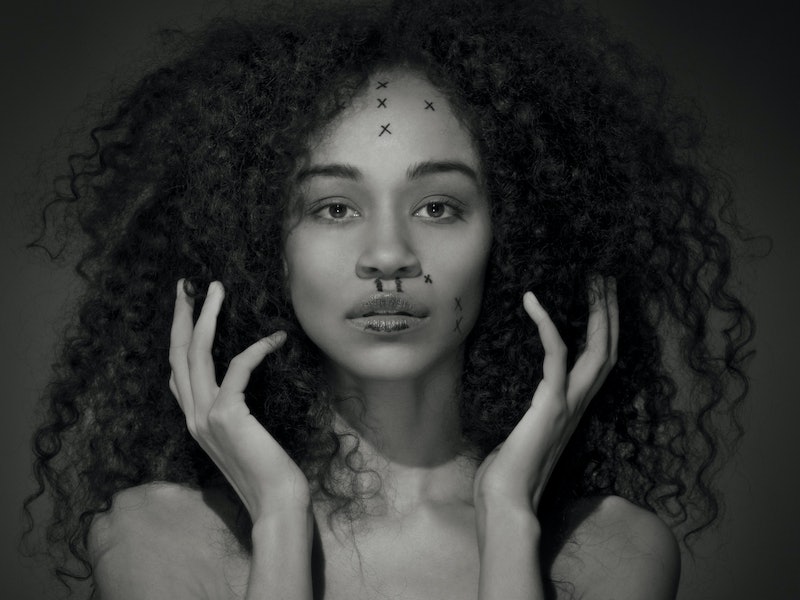 New York-based photographer Marc Erwin Babej recently teamed up up with his close friend, plastic surgeon Maria LoTempio, to illustrate the dichotomy between the subjective idea of beauty (what might make your head turn, but does nothing for your friend) and the geometry-based standard that a plastic surgeon has been trained to see. In his series Mask of Perfection, Babej recruited 12 twenty-something models who fit the aesthetic ideal that we, collectively, as a nation, have deemed beautiful. He then gave LoTempio the assignment of pointing out where these women would need to "upgrade" according to plastic surgery. The women were marked with pre-operative markings — the Mark of Perfection — and Babej snapped their photos in the style of 1930s Hollywood portraiture.

It's difficult — if not impossible — to look at these images without them bringing about a deeply passionate response. It's jarring to see the "flaws" of such stunning women pointed out in, quite literally, black and white. You leave the images feeling stunned, mesmerized, incredulous, or intrigued — or maybe even a combination of all those emotions. When I first saw Babej's images I was simultaneously captivated and unnerved. My stepmother is a plastic surgeon, so I grew up around discussions of Botox, and lifts, and tucks, and injections. But Babej's images made me wonder if our definition of beauty has become so impossibly narrow that it cannot be achieved naturally.

Babej has declined to speak about his opinion regarding the message behind Mask of Perfection, telling me, "I do have a strong opinion, but I'm consciously not taking sides because the point is not to propagate a certain view. I'm much more interested in getting people to think about why they think what they do." To him, Mask of Perfection is not simply a series about the plastic surgery industry. Rather, it's about "the structural difference in the concept of natural beauty versus the plastic surgeon's view of beauty."

It's certainly an interesting topic to explore. One is completely subjective, based on personal history and taste, while the other is objective, based on geometry and symmetry. Mask of Perfection superimposes those ideas upon one another, showing the polarity between what is "attractive" and what is "beautiful." What is beautiful can be analyzed by a plastic surgeon. Exact points of symmetry can be pointed to and argued for. What is attractive, however, is more instinctive and emotional. It's why you understand what a friend means when he says, "I know that X is more handsome than Y, but I'm still more attracted to Y."

Babej says that "the [drawn on] points represent the specific points of discrepancy between the plastic surgeon's view of beauty and natural beauty," but they also represent the difference between what is logical and what is emotional in how we conceptualize beauty. We know, for instance, that Adrien Brody's alkaline nose is technically a flaw, which is to say that a plastic surgeon would mark it up for not being symmetrical. But we also understand that his nose gives him character, and we understand why that's attractive — often times even more attractive — than perfection. LoTempio's marks point to what is technically perfect, but it's what's under those marks that is interesting, and what's interesting is often more captivating than what's perfect.

Babej explains that LoTempio isn't necessarily advocating that these women need these different procedures. "When Maria would would mark them up, some of the models would ask, 'What about this? Do you think I need this?' And Maria would say, 'You don't really need this. Yes, technically it's something you could consider, but here's why or why not you would consider it." There was one woman, however, who LoTempio couldn't even bring herself to mark up.

Originally, Babej had a thirteenth model, but he wound up not using her in the series after LoTempio explained that this was a perfectly symmetrical woman and refused to mark her up. "Patient Thirteen was shot as perfect," says Babej. "I have the image, but it has never been published." He makes the image available to people or insinuations who purchase the entire series, since the image does make sense if its in the context of the others. "It's not that she's more gorgeous than the others," says Babej. "It just happens to be that she is perfectly symmetrical."

Mask of Perfection gives a thought-provoking look into the $11 billion dollar plastic surgery industry. "Plastic surgery represents reason," says Babej. "It aims to be objective. It's rooted in proportions and geometric relationships." Mask of Perfection takes this objective view of beauty and places it directly on top of the subjective. It shows how ineffable and subjective beauty can be, and how, perhaps, perfection is not the most interesting look to strive for.