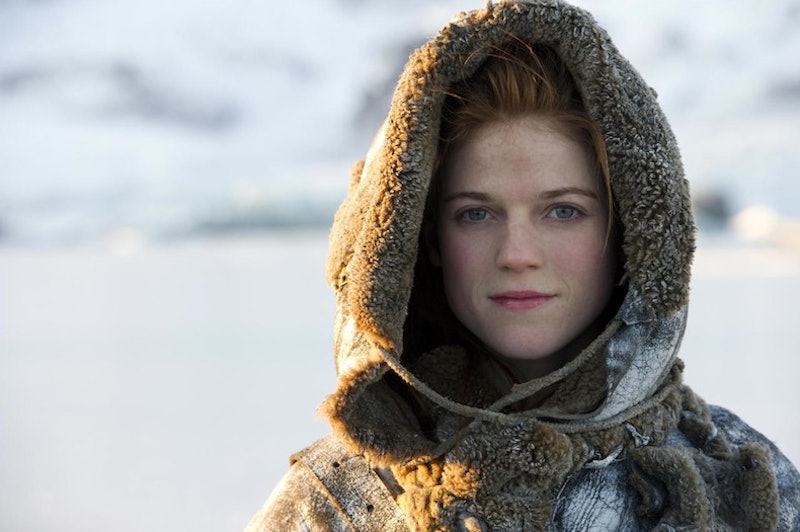 You know nothing, Jon Snow. Who's the woman to first utter those now famous words? Why, it's Ygritte, one of the most badass women on Game of Thrones . This feisty ginger played by Rose Leslie was the former love interest of Jon Snow — 'til she bow-and-arrowed him, which goes to show ya that you shouldn't break the heart of a Wildling. (He deserved it though. Kind of.)

Anyway, with the upcoming Battle of Castle Black on Game of Thrones, it's very likely that this next episode will be a big one for Ygritte. This is long overdue, since she hasn't had significant screen time for awhile — and we miss her! Last week, we did get to see her briefly: she spared Gilly's life, which was probably meant to remind us that even though she literally stuck it to our heroic Night's Watchman (with arrows, ouch), that she's actually got some kindness in her heart

But with the Wildlings coming to seize Castle Black (ONCE YOU GO CASTLE BLACK YOU NEVER GO BACK, GUYS), we know Ygritte and Jon Snow will reunite — but it's not going to be romantic. It's never fun to meet a former bed-mate anywhere, be it a bar or a battlefield.

So! Since it's definitely going to be a big episode for this lady, why not celebrate this character...with a classic ode?

An Ode To Ygritte

The redheaded Wildling in the army of Mance

Who fell for Jon Snow and he gave her a chance

But she struck him with an arrow and bow

Because he left her and nothing he knows

But actually, there was something he knew

"That thing with your tongue, Jon Snow that you do"

We all can remember that episode, no?

(In Westeros, a lady can have a big O)

She disrobed our hero, and took his V Card

But when you're fighting a war, things can be very hard

Despite red hot — or should I say, ice cold — sex

What's beyond the wall determines what will happen next

But Ygritte's about more than romantic conquest

She climbed over the wall, she did it the best

Though she's a shade too violent, and at times far too rough

She didn't need a man like Jon Snow to be saved

As someone who needs a guy to protect her

(But we know in the end, romance did infect her)

But this red-headed lady is feisty and fierce

As her blade through innocents certainly pierced

And although that's wrong and sometimes we ask, "why?"

She's more fierce than the men, that you can't deny

Though Snow's departure has left her broken, un-kissed

(Or as the actress Rose Leslie has said, "Ygritte's pissed")

We know she'll be mighty when she's at Castle Black

Cause once you go Castle Black you never go back.

Wait! Hopefully that the above isn't true

You don't think she'll die this episode...or do you?