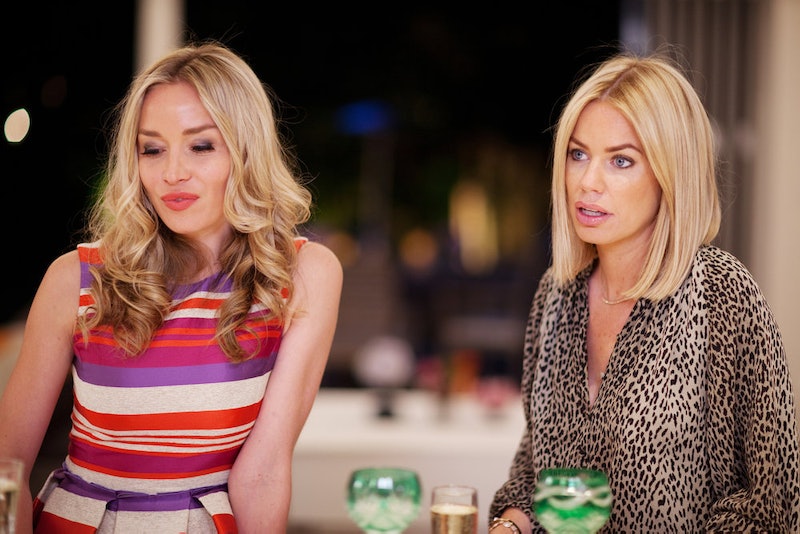 The latest Bravo docuseries about a group of women, Ladies of London , kicked off last week, and we can already tell that these gals are more frenemies than besties. With two Brits and three American women trying to find their way in British society, there's a strong culture clash and a battle for who will reign supreme in this city. While the British backdrop and traditions add an extra air of sophistication to this show, it all still feels a bit like high school. Actually, it feels a bit like one very specific school, North Shore High School, as Ladies of London is basically Mean Girls with accents.

The struggle for social supremacy, feelings of superiority, posh put-downs, and backstabbing should all make Ladies of London very familiar to Mean Girls fans. Not to mention, there's the whole "New Girl in Town" vibe with the American expats on Ladies of London trying to acclimate — or not — to British society the way Cady Heron attempted her own infiltration of North Shore's Plastics.

Whether Caroline is ruling the roost like Regina George or Marissa is working both sides like Cady, each Ladies of London cast member has her own Mean Girls counterpart. We've determined who of the Ladies of London cast are still trying to make "fetch" happen and who's got ESPN or something so you don't have to.

As a famous British socialite and boss of her own company, Caroline is the Queen Bee of Ladies of London , and she knows it. She and Regina are both convinced that they always look flawless, and they're never afraid to throw some shade because they know you can't do anything about it. Just like Regina, Caroline is the leader of this group of ladies, and if you want to make it in London, you've got to have Caroline on your side.

Annabelle and Janis are both dark, mysterious, and moody ladies. They don't have time for nonsense and never leave the house without some thick, black eyeliner on. Let's just say you'll be sorry if you piss these women off.

Even though Juliet was actually friends with Lindsay Lohan in real life, she's more of a Gretchen Wieners than a Cady. Like Gretchen, Juliet is outgoing and desperately wants to be in the spotlight, even if she has to drown out some of the other ladies with her booming voice to get there.

As one of the older Ladies of London, Caprice shares some cougar-like qualities with Mrs. George and looking young and hot is very important to both of them. Just like Mrs. George really wants to be one of the girls alongside her daughter and her friends, Caprice wants to be accepted like any other Londoner, even if that means keeping mum when others make fun of Americans.

Marissa has wholeheartedly embraced British culture and is even on her way to become a full-fledged British citizen, just as Cady became a convincing member of the Plastics. However, they often find themselves members of two opposing worlds and struggle to please everyone.

Noelle is by no means as daft as Karen, but she is probably not the savviest of the bunch. It also feels like she can be easily manipulated, just like Karen. Every time Noelle's fiancé Scot is on screen, it seems like he's hiding something, but Noelle hasn't lost faith in him. As long as Noelle doesn't think she's psychic, there's still hope for her.