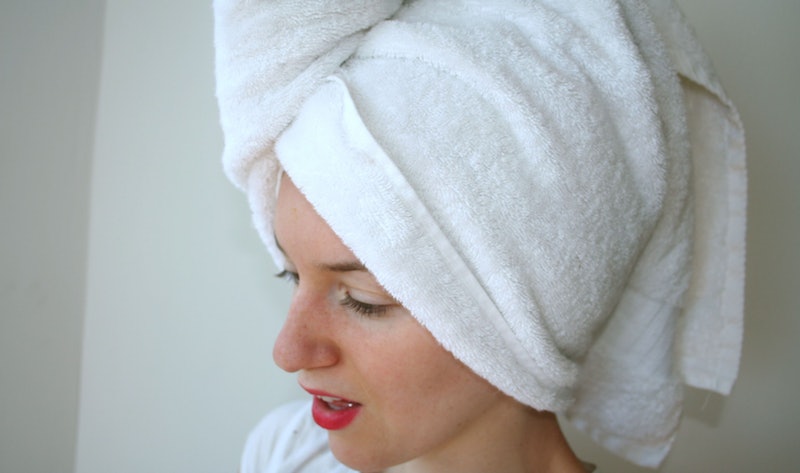 My hair's been terribly dry lately. Blame it on an at-home ombré job, a body wave (it's a perm that makes your hair permanently messy, instead of curly, because WE LIVE IN A CRAZY WORLD AND I'M OKAY WITH THAT), or the fact that I probably haven't been eating enough healthy fats, but my poor little split ends are quickly becoming "straw-like," AKA the world's worst hair adjective.

As something of a DIY girl myself, I knew the solution had to be found in my refrigerator. The question was, which homemade remedy would do the trick? The carton of protein-packed eggs that I was supposed to be scrambling for breakfast? The avocado softening away on the back of the counter? The answer, friends, was obvious: EVERYTHING. Every popular homemade hair treatment ever, blended into one soft, frothy, vaguely disgusting mess.

I set up a few boundaries: ingredients used as a hair rinse didn't count (flat beer, vinegar, vodka), and I was unwilling to spend thousands of dollars on this casual little kitchen experiment (so caviar was out — just kidding, caviar isn't a hair mask ingredient — just kidding again, I Googled it and apparently it is). That left me with nine fairly cheap, fairly common and/or trendy hair remedies that I gathered on a wild late-night grocery run.

This morning, I woke up bright and early today and surveyed my purchases. Would this pile of hippie solutions save my hair — or turn the greasiest mistake I'd ever made? I plugged my nose (literally), closed my eyes (metaphorically), and began.

Yogurt + egg. Both are packed with protein and strengthen hair — which is mostly made of protein itself. Needless to say, both ingredients are very popular with the at-home hair mask set.

Coconut oil + Argan oil. These two rich (and super-trendy) oils are can be used to moisturize, well, almost anything, and provide much-needed hydration to dry locks. Natural oils are common in DIY hair treatments as well as commercial ones.

Banana + honey. I hate bananas, so file this under Taking One for the Team, but bananas paired with honey are one of the most popular hair treatment combos out there. Both are moisturizing and full of vitamins and antioxidants; honey is also a humectant, so it actually attracts moisture to hair.

Avocado. Well, duh. Packed with moisturizing fats; has been good to my hair in the past.

Olive oil + rosemary. Lest you doubt my dedication to this project, let it be known that I actually infused a bit of olive oil with fresh rosemary last night. I know, am I a lifestyle blogger now? Olive oil is obviously moisturizing; rosemary has long been used as a traditional remedy for thin or lifeless hair, and one study suggests that rosemary oil may help with hair growth.

I threw in one egg, half an avocado, half a banana, a spoonful of yogurt, a spoonful of Manuka honey, a drizzle of Argan oil, a drizzle of coconut oil, and all of the rosemary-olive oil you see pictured above. Who needs real measurements? For about two seconds I tried to mash everything together with a fork, but quickly gave up and threw the mix in a blender.

The result was surprisingly non-disgusting:

I expected this "mask" to smell nauseating — raw egg plus banana? NOPE — but it just smelled like yogurt. Clarification: It smelled like a suspiciously sweet yogurt that no one in their right mind would ever eat, but it didn't make me throw up, which is a huge plus in my book. And the texture? The texture was amazing, like some sort of whipped body cream. Light, fluffy, smooth, and incredibly easy to apply to dry hair.

I plopped it all on:

…then topped the whole thing off with two plastic bags and a towel. All of those layers trapped the heat from my head, which seems to help the "product" (= weird smoothie) penetrate better. I've found that a clean white towel and red lipstick makes the whole somewhat disgusting process feel a bit more glamorous than it otherwise would.

I left the whole thing on for two hours — if I was going to do the Ultimate Hair Mask, I had to leave it on for the Ultimate Length of Time, right?

After two hours, I shampooed. Then conditioned. Then wondered if I'd shampooed enough. Then started thinking of ways I could fake it if my "after" photo was totally greasy. Then I made some couscous. Then I combed through my damp hair, which was a bad idea, as you'll see later.

After some impatient air-drying, I discovered that…

TAKING "AFTER" PHOTOS IS THE WORST THING EVER. There's so much pressure to look amazing! But hey, is it just me or does my hair look really shiny?

The frizziness is my own fault for combing through damp wavy-ish hair (I really should have known better) and for taking a bunch of photos like this:

But, overall, this mask resulted in shiny hair and really, really soft ends. I think the multiple sources of moisture may have toned down some of my waviness a bit, because my hair looked straighter than normal, but the end result was silky and infinitely touchable. Not bad for some hippie oils and half an avocado.