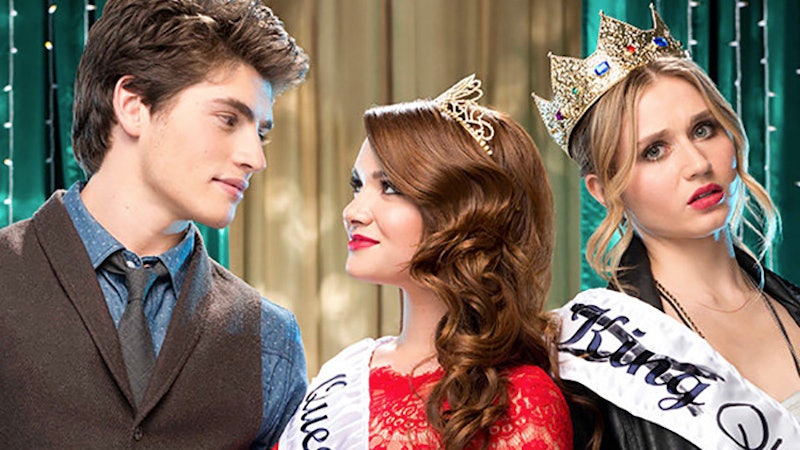 Faking It was MTV's most controversial new show, the show that everyone hated before a single episode of it had even aired. Why? Because it was about two straight female friends who pretended to be lesbians to be popular at their ultra-alternative Texan high school. Then everyone actually watched the pilot episode of Faking It and they realized that it was so underwhelming that it wasn't even worth the anger. Faking It did eventually find a fan base, but most of its eager detractors quickly found something else to do with their Tuesdays at 10:30 p.m. Now Faking It has been renewed for season two, which might come as a surprise to people who didn't even realize it was still on, and, as someone who actually watches the show, I'm not sure Faking It deserves it.

Oh, don't get me wrong. Faking It did make a valiant effort to find its footing beyond being wildly controversial for the sake of controversy. It doesn't take too long for one of the two friends — Amy, played by Rita Volk — to realize that she has feelings for Karma and might, in fact, actually be a lesbian after all. Even the fact that Amy is the more tomboyish of the two didn't feel like a riff on another stereotype, as Volk brought true heart and nuance to the character. However, Amy remains the most nuanced member of the cast. Everyone else still feels like a stereotype with trimmings.

Take Shane for example. Shane is the most popular boy in school and he's also gay. He's the best friend of Liam, Karma's crush and the most popular straight guy in school, and he becomes Amy's guru on her quest to come out of the closet for real. In fact, Shane is the first person that Amy confesses their ruse to and he's not even angry about it. Then again, considering he sought out Amy and Karma as friends because he needed lesbian friends, I guess there's not much room to climb up on that high horse.

Several episodes into the season and Shane is still a stereotype. Although Shane quipped in the pilot that Lauren is so two-dimensional that she's practically a character from Glee, everyone seems to have received more layers than him so far. Most of the time, he seems to exist solely to be everyone else's Gay Best Friend with everything that the stereotype entails. You'd think the most popular guy in school would have better things to do than babysit the rest of the heterosexual main cast.

I'm glad that Faking It is coming back for a second season if only because it gives them more episodes to do right by Shane and to do right by the show in general. The controversial premise of the show is far from enough to keep the story lines coasting along and the storylines they've explored so far range from ridiculous to outright stupid. (Really? Shane helps Lauren position herself perfectly for sexy pictures she can text to her boyfriend? That's a subplot?)

However, the show has a lot more heart than most people realize and having the opportunity to give all of the characters equal attention and perhaps focus a little less on just Karma and Amy (and even less on Liam, please and thank you) might work out for the best. Maybe it even means that Faking It can become known as more than just "that show everyone was complaining about and then promptly forgot".

More like this
Viktor Hargreeves’ Coming Out Scenes Are The Sweetest Part Of Umbrella Academy Season 3
By Gretchen Smail
Who Is Liam Neeson's Character In The Obi-Wan Kenobi Finale?
By Kadin Burnett
Everything You Need To Remember Before Westworld Season 4
By Brad Witter
Here's Why You'll See Less Of Olivia Rodrigo In 'HSMTMTS' Season 3
By Bustle Editors
Get Even More From Bustle — Sign Up For The Newsletter