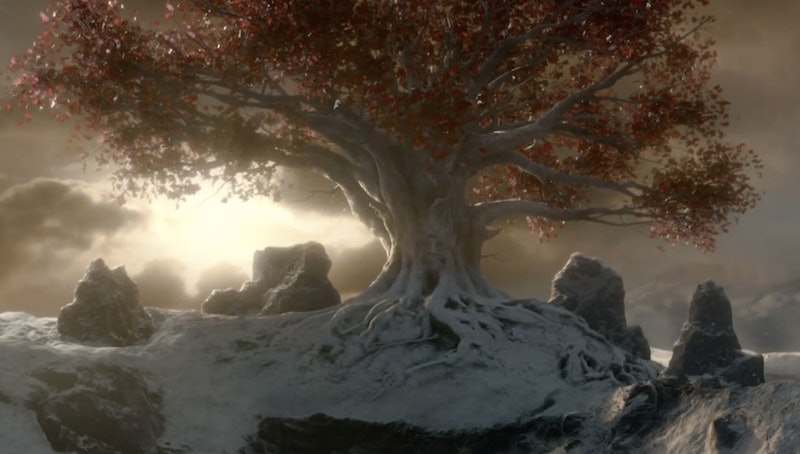 So, next week is the season finale of Game of Thrones . And the episode title is the seemingly innocuous "The Children." Which makes sense because, well, the kids of Westeros have been sort of owning it all season long, haven't they? But it could also signal something else — and there are potentially huge spoilers here so turn away now if you're adverse to such theoretical wanderings — it could signal a game-changing arrival that's been hinted at since Season 1. The return of magic to The Realm... in a big, big way.

Now there are several reasons this theory feels sound but the biggest is hidden in that title. Sure, there are many ways in which a title as sorta-vague as "The Children" could fit into the storyline, but there's one thing it hints to specifically from the books: the Children of the Forest. (Commonly referred to simply as the Children. See?)

For those unaware, the Children of the Forest were a mysterious, non-human race of humanoid-type creatures typically no larger than a human child when full grown. They are said to have long-ago departed from the continent of Westeros — having last been seen over 12,000 years ago. Their history is the stuff of legend, myth, and lore amongst those that currently inhabit the Realm, particularly south of The Wall. Even those that believe in their existence (like Maester Luwin and Ned Stark) think that they have been extinct from the realm of the living for many, many years.

But this season has slowly been heading to North of The Wall and at the center of that is Bran Stark — a warg who, with the help of greenseer Jojen Reed, has been pushed further and further beyond the known world of Westeros and into something entirely uncharted and understood. And at the heart of it lies the Children of the Forest.

According to legend, the Children were gifted with supernatural powers and magic like the ability to "wear" animal's skin (warging), commanding power over beasts, greensight, and an ability to speak to the dead. And that giant red weirtree (the central figure to those who practice the religion of the Old Gods like the Starks), whose carved faces came by the hand of the Children in order to keep watch over the woods. It should be noted that the Children believed the weirwood trees were gods they became following death. Embedded into the land forever.

A land that — as evidenced by the battle of Castle Black — holds many a mythical creature long-since-believed extinct or not real. Like giants and wooly mammoths and yes: even those pesky White Walkers. Or, say, a vengeful, heart-of-stone mother looking for retribution after her own blood-red fall. (Cough.)

There's also the fact that the finale episode is going to be long. Like, way longer than most recent episodes, which hovered around the 51 to 53-minute mark. The finale is set to be a full 66 minutes long, meaning there's a LOT of story they're packing into this episode. Sure: we need to wrap up a lot of storylines of the children of Westeros like Arya, Sansa, Jon Snow, Tyrion, and Dany — but it's also plenty of time to leave us with a giant, game-changing cliffhanger as GoT is historically wont to do. Our predictions? There's a whole new ballgame that's about to be explored and just like Jon Snow: we really know nothing.