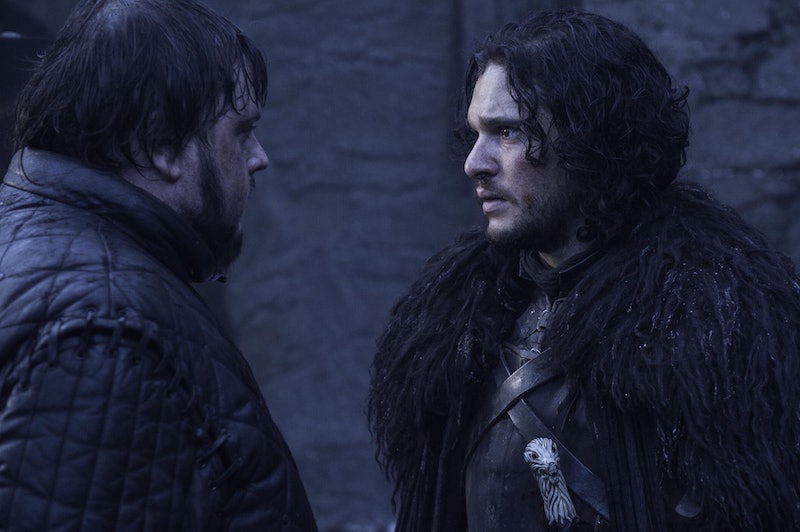 We recently saw Game of Thrones in its ninth hour, which means the final episode is upon us. But fear not, Westeros fans — the Game of Thrones finale will be extra long. In fact, it will be 66 minutes, which is an entire 15 minutes longer than Episode 9, "The Watchers on The Wall." So think about it: an extra 15 minutes to wrap up all of the disparate tales that have been happening in Westeros! Lucky us!

It makes a lot of sense that we'll get an extended finale. After Episode 9 spent the entire time majestically tackling the epic Battle of Castle Black, we have a lot of stories with loose ends to tie up. It's been an incredibly intense season, what with Joffrey's death in The Purple Wedding all the way back in Episode 2 (can you believe we've gone a whole season without his tyrannical ways?), the very extended version of "What's Happening to Tyrion!?", and Oberyn's exit with a (head) bang. We've also seen Jorah go from friend-zoned to no-zoned with his exile, and we've barely seen those dragons. Furthermore, Arya has been on a post-modern, Beckett-sounding jamboree ("nothing is nothing") with The Hound, Sansa has transformed for better or for worse, and Littlefinger revealed that he was the evil puppet master behind everything.

So yes, we still need a lot of closure, so an extra 15 minutes is definitely warranted.

Of course, it's Game of Thrones, so we can't expect things to be tied up in a nice little bow. In fact, we can't really expect anything, unless we've read the books (and if you have — PLEASE DON'T SPOIL!). But hopefully, some major questions will at least be answered: will Tyrion live? Will any Stark kids reunite? Will we see those White Walkers again? What about Brienne and Podrick? Will someone shove Robin out the moon door? And is the actor who plays Daario going to appear in Playgirl?

Bring on the finale.