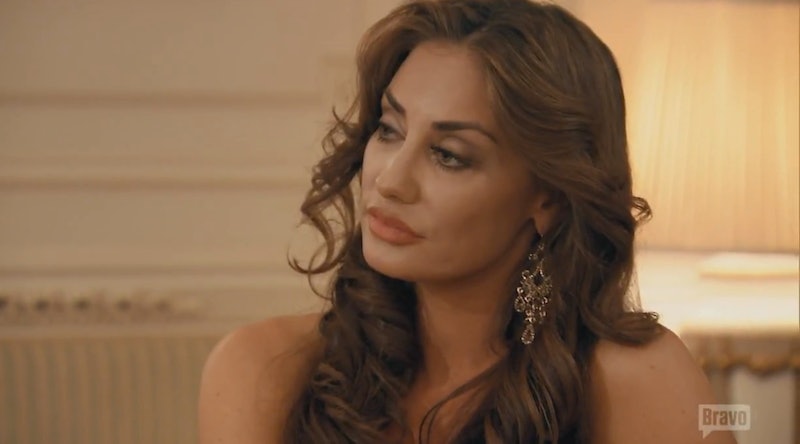 Did you know about the Good Day L.A./CUT Fitness drama that just about ripped Tamra Judge and Heather Dubrow's friendship in two? I did not know it was a thing. But it was a THING. A thing that fuses itself to Chairgate and takes over Shannon Beador's Christmas party/Monday night's episode of Real Housewives of Orange County . Fortunately, new Housewife Lizzie Rovsek totally saves the episode.

Here's a brief rundown of the conflict: Tamra is mad at Heather because of an old Good Day L.A. segment that featured a CUT Fitness rival. Heather insists she didn't book that gym for the segment, but Tamra doesn't believe her. Heather wants to bring CUT Fitness on Good Day L.A. now, but Tamra is not feeling it. There are more details to the fight, sure, but you get the gist. The gist is all any of us want and need, really.

During Shannon's party, Tamra tells the non-Heather Housewives about the Good Day L.A. drama. Shannon gets TURNT UP about this. She's out for blood. Forget whatever was said at that lunch with Heather, she's in Tamra's corner. Shannon tells Tamra about her new “arrangement” with Heather (i.e., the moment she has a sliver of an issue with Heather, she's supposed to call Heather out), so she decides she’s going to bring up the CUT Fitness conflict. Shannon and Tamra are ready to battle Heather.

The moment Heather enters the room, however, Shannon and Tamra get cold feet about the battle. So, Lizzie does something amazing: She asks why Tamra and Shannon are acting like they weren't just talking mad crap about Heather, and then she repeats everything Tamra and Shannon said about Heather. IN FRONT OF HEATHER. Everyone is shocked.

Lizzie. LIZZIE. LIZZIE. Oh my god. I don’t know if this move is Lizzie’s, a producer’s, or wine’s, but it is a fantastic move and I will applaud it for forever. We could've been stuck in the Good Day L.A./CUT Fitness gossip vortex for at least three more episodes, but Lizzie isn't about to let that happen. Instead, Lizzie sets the wheels in motion. And before we can bat a Latisse'd eyelash, there is more confrontation than you can shake a stick at. Ah, so wonderful. We owe Lizzie so much.

Shannon and Tamra say Lizzie is out of line for telling Heather about all of the shittalk. Lizzie doesn't care. Neither do I. And, quite frankly, neither do Shannon and Tamra. They'd much rather argue with Heather about CUT Fitness, Good Day L.A., and whether or not Heather is condescending. And so the rest of the evening goes.

I'm sorry, enough about CUT Fitness and Good Day L.A., I only want to talk about Lizzie. I love Lizzie's moxie, Lizzie is the best, Lizzie is my hero, et cetera. Lizzie's stood up to Vicki Gunvalson multiple times, doesn't seem to be affected by anything the other Housewives do or say, and put Shannon and Tamra on blast. If Lizzie continues on this trajectory, she could my new favorite Real Housewife. She'll land in the top five, at the very least.