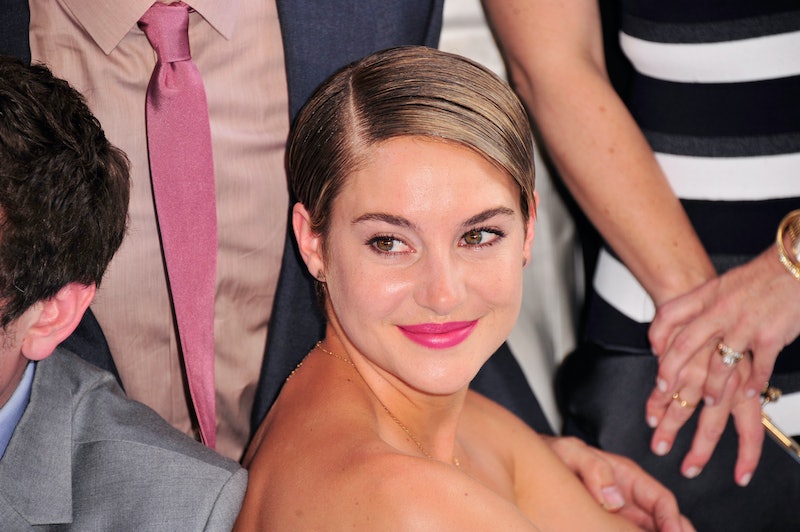 With The Fault In Our Stars making major bank at the box office its first weekend out, Vanity Fair declared Monday that its star, one Shailene Woodley, "Is Now Officially a Movie Star." As such, it's only appropriate that her Unique Movie Star persona has officially taken firm hold over everything written about her: Shailene Woodley is the new ambassador for all things hippie free spirit, from purposeful homelessness to eating with her hands.

For Angeline Jolie it's the balance between edgy badass and philanthropist Mother Earth; for Jennifer Lawrence it's that no-filter Cool Girl class clown vibe; for Kristen Stewart it's a general, often awkward aversion to the more stilted showboating of the Hollywood game — most big Hollywood stars have some sort of persona that can be easily packaged and repackaged into profile after profile, and Woodley's definitely a part of that pack now. She is now, for better or for worse, a brand now, whether she likes it or not. It helps that practically everything that comes out of her mouth seems to fall in line with the solidifying public impression of Who Shailene Woodley Is. Just take this bit from Vanity Fair's profile of her, in which she's asked about any small talents she may possess:

I eat almost always using my hands, not a fork. And I can pick lots of things up with my feet.

That there's not a huge revelation — just an hour ago I picked up a piece of mail I dropped with my feet, it's no big thang. The eating with her hand brings up some logistical questions (spaghetti? Ice cream?), but it's not hugely revelatory. What it does do, however, is fall pretty perfectly in line with what past interviews have told us about Who Shailene Woodley Is:

If Angelina Jolie was our resident metal goth chick of the late '90s and early '00s, Shailene Woodley is our Mother Earth of the present. As with any movie star, it's practically a parlor trick to play the game of distinguishing what is media and PR — if not designed by her own team than by the media (this writer and site included) searching for angles in the day-to-day grind of celebrity reporting — and what is reflective of who Woodley really is (whatever that means).

Though she's been acting since she was but a wee babe, by all accounts Woodley is still very much at the beginning of her career. Her persona and the way we perceive it may change over time, just as she herself may change over time. But it's interesting to watch, this formation of a new brand — especially when the person behind it seems so invested in finding the balance between being a big couture-wearing Hollywood movie star and being the type of person who can escape into the woods and maybe live in a tree.