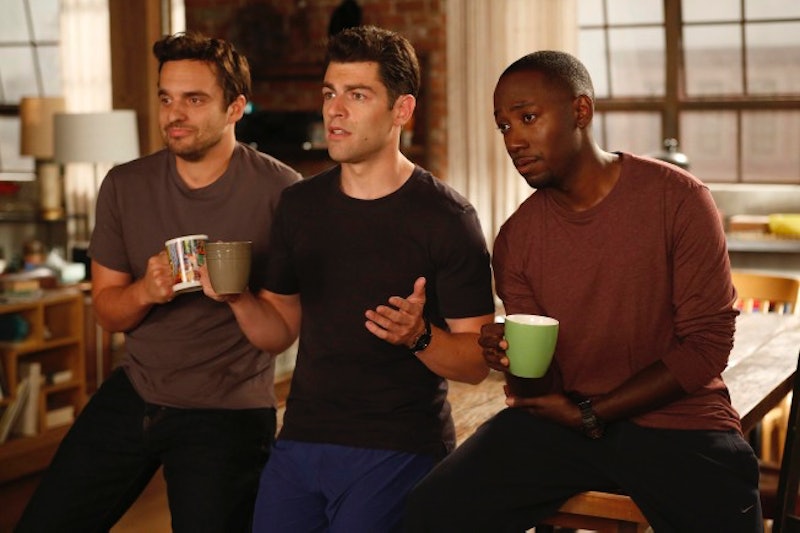 I don't think I ever realized this before, but until Coach (Damon Wayans Jr.) reappeared on New Girl , the show pretty much had no alpha male to speak of. In a recent "Girls Night Out" panel organized by Fox, Liz Meriwether (New Girl's showrunner) admitted that Coach is the leading man that the flatmates needed.

"He [Wayans Jr.] added this great burst of energy," said Meriwether. "I feel like he's such an alpha male."

Although all three of the "fearsome"-threesome would probably protest the idea that they're more beta than alpha — I can already imagine the shouts of outrage that would emerge — it's totally true. It's strange because, in a group of friends, there's usually one or two alphas that tend to take charge and decide what the group will do as a whole, but with the motley crew that is Nick, Schmidt, and Winston, there's no alpha in sight. Although you could argue that either Jess or Cece is the alpha, neither of the women are "originals" of their boys club. Which means that before the true alphas entered the scene, the men were just a group of guys goofing around.

But now that Coach is back in the mix of things, they've got an alpha to whip them into shape. For now, let's just take a look at our kind-of-betas who desperately want to be alphas.

At first glance, you might think that Schmidt is an alpha male, but he's definitely not. He's just so ridiculously OCD and neurotic that he tricks you into thinking that he's an alpha, but take away his penchant for neatness and his hyperactive tendencies and you're just left with a man who needs approval from others. One look from Jess or Cece and his macho facade melts off him onto the floor. He's got alpha potential buried deep inside his ice-cold heart, but until he learns to chill out and take charge without coming off as a complete asshole, he's always going to be a beta who's an inch away from the top of the social pyramid.

Poor Nick Miller. His life is a complete mess all of the freakin' time. And just when you think he's leveled out, he does something completely stupid that only he would do. The day Nick Miller is described as an alpha male is the day Schmidt buys a suit from Goodwill.

Winston couldn't be an alpha male even if he wanted to be. In his super strange mind — who even knows what goes on in there? — he most likely thinks that he's the man of the house who's running things. However, the only person he's running is Ferguson, and Ferguson isn't even a person. He's a cat. You keep on doin' you, Winston.