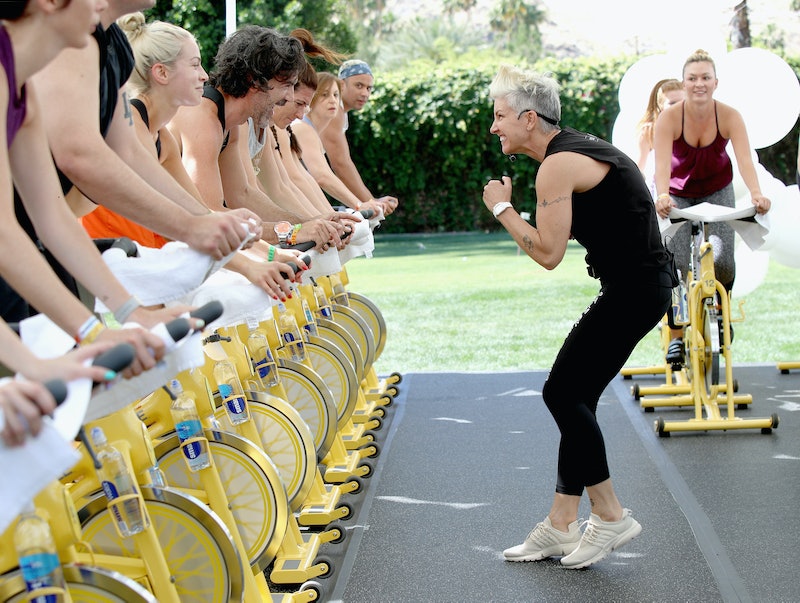 I am addicted to spin class. I'm convinced that every cycling class session has a time-travel effect, making 45 minutes feel like 15 (note: the same logic does not apply to an hour-long class, which feels like forever). It's a one-and-done workout: cardio, strength, endurance, even a little zen, depending where you go. Even on the days I dread it, I know that if I can just get through the class, I can check "workout" off my to-do list and have seriously earned it. What feels better than that?

The emotional ride of an indoor cycling class can be as intense as the one you're clocking in on your bike. Whether you're a seasoned pro or a total newb, we bet these thoughts have run through your mind during class:

This is going to be awesome!

I love getting on the bike. I always feel so great afterwards!

Inner voice: You did this to yourself.

These clippy shoes are hard to get on the pedal, right?

How does everyone else have so much energy right now?

Suddenly, I understand the purpose of EDM.

I am a spinning goddess!

I really hope I don't drop my towel.

These shoes were way too hard to get in to to slip out of them.

Wait, what if there were memory foam bike seats?

Does it need to be this loud?

I can't even hear the instructor over the dub step!

What is this remix?

Is no song sacred?

Wow, sprinting is so much harder than climbing.

Does anyone ever fall over the handlebars?

I wish this instructor would just. Stop. Talking.

Let me ride in peace, lady.

Um, dude, I don't think you're doing it right.

Butt back, chest down. Not hard, guys.

What exactly is the difference between 5 and 7 resistance?

Would the instructor notice if I just...left?

I could slip out easily if it weren't for these shoes!

Will this hill ever end?

This is the woooorst.

Why does the instructor get to get off her bike and I can’t?

Life is so unfair.

Is that girl making...sex noises?

Heavy breathing, I understand. Rein it in, girl.

How can two-pound weights be sooo heavy?

I am not coordinated enough to do push-ups while riding a bike.

This is a coordination test I never would have anticipated.

I'm sorry! I just cheated a little on my resistance!

This will all be worth it when I’m naked.

What? It's a motivating thought.

Is anyone going to judge me if I can't get my shoes out of the pedals?

Yes. Yes, they will.

Wow, I am not entirely sure I can walk down stairs right now.

Damn, I need a drink.

And carbs. All of the carbs.