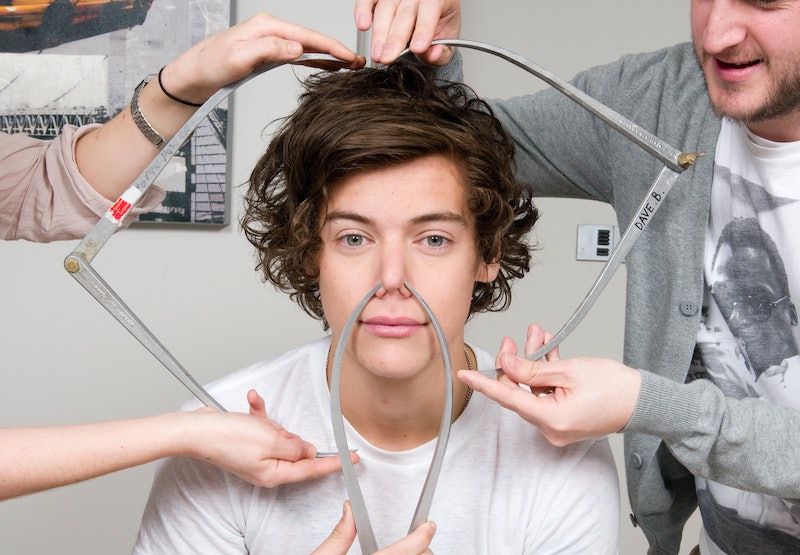 Sometimes, when the media's feeling lonely and/or especially frisky, it likes to obsess over the private sex lives of teenagers. Because, you know, what else is there to do? Solving economic crises or discussing the political and social future of the very broken modern world makes dull boys and girls of us all, does it not? Especially when there's news such as this: Harry Styles of British tweendream band One Direction is "pretty sure" he's not bisexual according to a recent interview with British GQ. Sound the alarm! Release the hounds! Call me Ishmael!

Indeed, the portion of the interview amounted to maybe seconds of a larger conversation, but its impression will be felt for tens of hours. The interview purports that wee Styles may have taken on a male lover (or is just doing that whole experimentation thing, but where's the fun in that angle? Normalcy is for the plebes!) named Nick Grimshaw, a radio and TV presenter 10 years Styles' senior. To which Styles responded "Oh, really? I didn't even know. We're not dating, no. We're just friends." Unsatisfied with such a casual response, GQ marched on, asking if Styles was bisexual. "Bisexual? Me? I don't think so. I'm pretty sure I'm not," replied Styles. ¡Escandalo!

Styles seemed to take the whole thing in stride, though, dispelling the rumors but also not paying them much mind. "Some of them are funny. Some of them are ridiculous. Some of them are annoying. I don't want to be one of those people that complains about the rumours. I never like it when a celebrity goes on Twitter and says, 'This isn't true!' It is what it is; I tend not to do that."

Because, ha ha, Styles, a 19-year-old kid with an enormous amount of notoriety and at least one (ahem, Taylor Swift) über-famous ex under his belt, has been rumored to have fooled around with a guy. Rumors! Gossip! Sex stuff! Tween girl meltdowns! All of which is way, way more fun than a they're-just-friends or sexual-experimentation-happens-in-your-teens sort of response. I mean, normal human reactions? YAWN! Boring! Next. No wonder everyone's all atwitter: The pageviews are strong with this one.