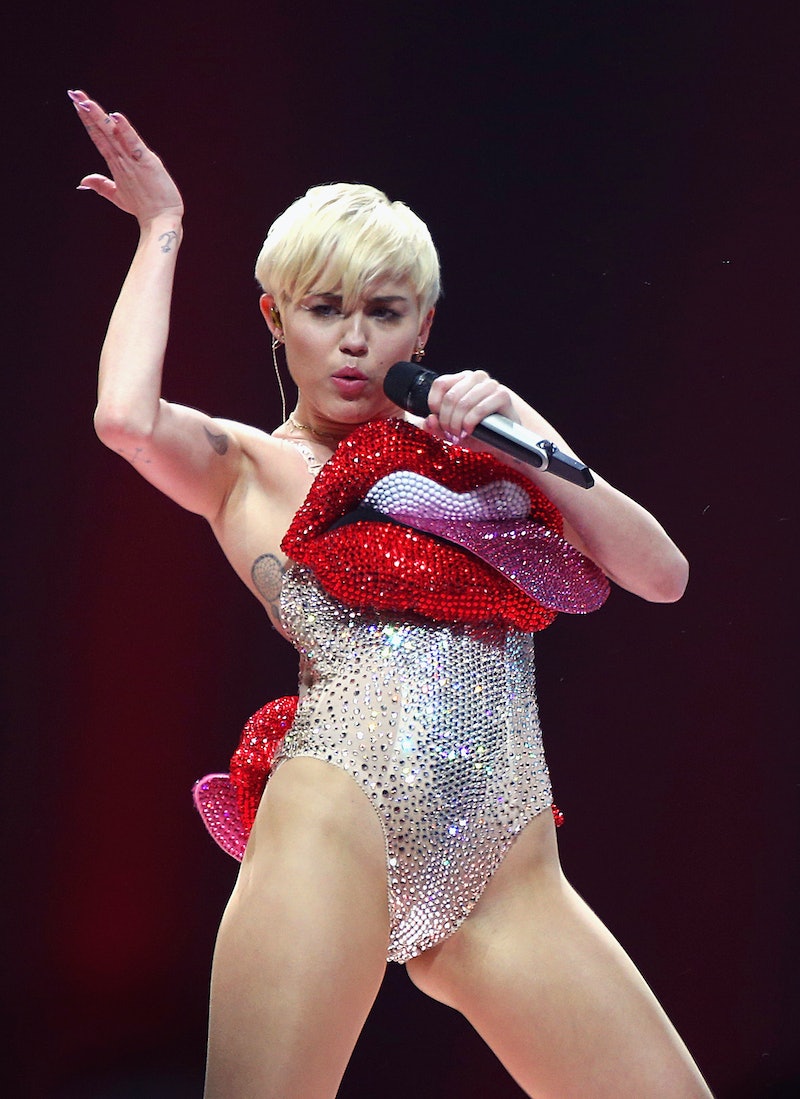 At this point, a naked Miley Cyrus is a pretty normal part of our society. We’ve seen the singer fully naked (minus her NSFW regions) on a wrecking ball, she got a little bit nipply in a spread for W Magazine, and we’ve seen her mile-long legs on TV and social media. But of course, why stop there? At least that’s probably what was going through her head when Cyrus posted a topless photo of herself on Instagram — because #preshowerselfies obviously.

The singer and actress posted two photos on Instagram on Saturday, captioning one with #preshoweralfalfaselfielife, mimicking the same hairstyle that the character Alfalfa sports in The Little Rascals.

In her first photo, Cyrus is wearing what seems to be a white, mesh inspired bra and black underwear (or maybe it’s a bikini?!), showing off her tattoos at an extremely flattering Myspace angle. Bed selfies are the best selfies of course.

The second photo features a topless Cyrus, Alfalfa hair and all, taking a mirror selfie with her phone. Strategically placed over her nipples are her arm on one side and a cartoon octopus on the other, likely so not to get reported on Instagram. I mean, we all know Cyrus, and if she had the choice, she’d probably be in her birthday suit every day of the week.

So, we know this is pretty typical for the 21-year-old considering we’ve all seen those Terry Richardson pictures of her, but is this getting to be a bit much? After all, Instagram deleted Rihanna’s account for posting nude photos from her Lui Magazine shoot. Hell, I’m all about the #FreeTheNipple campaign and don’t believe images of breastfeeding or even nudity in the form of art (like magazines) should be frowned upon or deleted.

However, there is a point when you have to step back and ask yourself whether you’re posting a nude or semi-nude photo online because, “I’m an empowered woman, hear me roar,” or to merely garner attention from others.

Back in the day, Nickelodeon star and She’s the Man actress, Amanda Bynes, posted topless photos of herself on Twitter while she casually stood in front of the mirror. Recently, James Franco decided it would be a good idea to share a mirror selfie where he’s cupping his manhood while also looking sweaty and like he just rolled out of bed. Don’t even get me started on Justin Bieber. And once upon a time, Lindsay Lohan was like, “Hey look. My hair is so long that it covers my ladies.”

If a woman or man wants to set their breasts or cojones free, then I say go for it, but can there at least be a little bit of mystery? I have the utmost respect for Cyrus with all that she has accomplished and the fact that she embraces her femininity, but maybe leave the pre-shower photos for a different time and audience.

More like this
Selena + Chef Season 4 Was Filmed At Hannah Montana's Old Malibu House
By Jake Viswanath
Kathy Hilton Tried To Explain Why She Misidentified Lizzo As Precious On Live TV
By Jake Viswanath
Sophie Turner & Joe Jonas’ Fave Taylor Swift Album Is Full Of “Bangers”
By Sam Ramsden
The Sean Bean Intimacy Coordinator Controversy, Explained
By Sam Ramsden
Get Even More From Bustle — Sign Up For The Newsletter