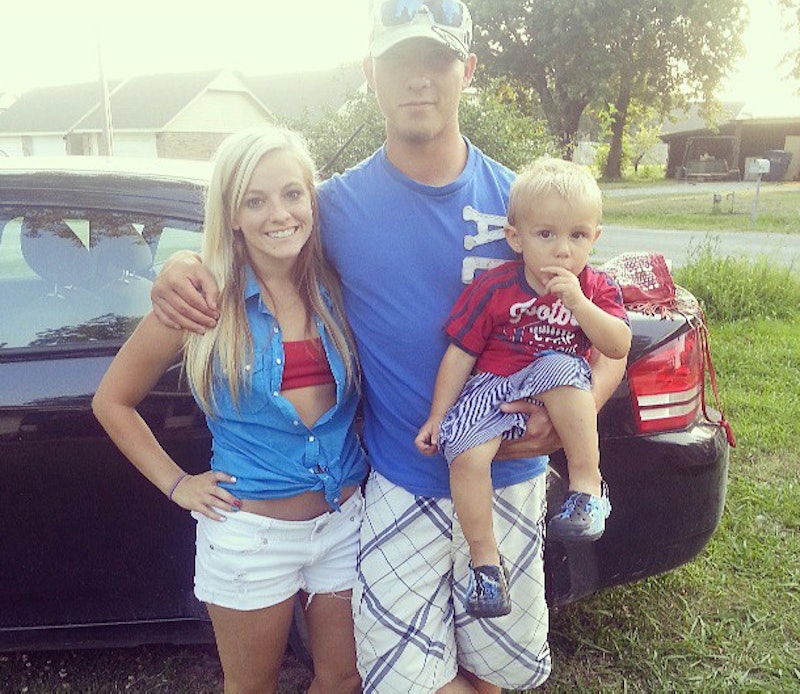 On August 26, MTV will premiere Teen Mom 3, its latest installment of the Teen Mom saga. There will be four new girls from 16 & Pregnant and we'll get to follow them in their lives as young parents, just like we did with the first two series' stars, Maci Bookout, Farrah Abraham, Leah Messer Calvert, Jenelle Evans, and Kailyn Lowry, among all the others. But there may be something different about Teen Mom 3 that we have never seen before: an actual happy ending.

The four new faces you can expect on Teen Mom 3 include Briana DeJesus, Alexandria Sekella and Katie Yeager, but it's Mackenzie Douthit who you should really pay attention to. If you don't recognize the name, Mackenzie is best known as the girl who says she didn't want to take birth control because she didn't want to gain weight — cut to one very pregnant high schooler busting out of her cheerleading uniform. Hopefully being on Teen Mom 3 will let people get to know the girl in the uniform, as well as her son and fiancé. That's right, fiancé.

On Mackenzie's episode of 16 & Pregnant, we met her then-boyfriend, Josh McKee, an actual, real-life rodeo cowboy. Mackenzie gave birth to their son Gannon Dewayne McKee (let't just try to move past that name) on September 12, 2011. Since then, the couple has not only stayed together but also gotten engaged. Until now, the only Teen Mom couple that's stayed together was Catelynn Lowell and Tyler Baltierra from the original series, who gave their daughter Carly up for adoption. Catelynn and Tyler aren't exactly at their best either, as they are currently on Vh1's Couples Therapy and recently called off their wedding.

Things are certainly looking up for Mackenzie and Josh though, as Mackenzie posted on her Instagram that they plan to wed on August 17. She also posts tons of adorable photos of the two and their son.

Even though the first season of Teen Mom 3 debuts just a few weeks after their wedding, don't expect to see it on MTV quite yet. Teen Mom is usually filmed many months before the show airs, and based on the trailer, there's still plenty of drama ahead for the couple. But thanks to the time delay, we also know that everything's going to be okay for Mackenzie and Josh in the end, which is really a first for the show. As strange as it may be to watch an MTV couple stay together past their baby's first birthday, you can't help but root for these two. Look at the cuteness! Four proms!

Here's an early congratulations for Mackenzie and Josh. Thanks for giving us some hope for MTV's Teen Moms, just when Jenelle and Farrah almost made us lose all faith.