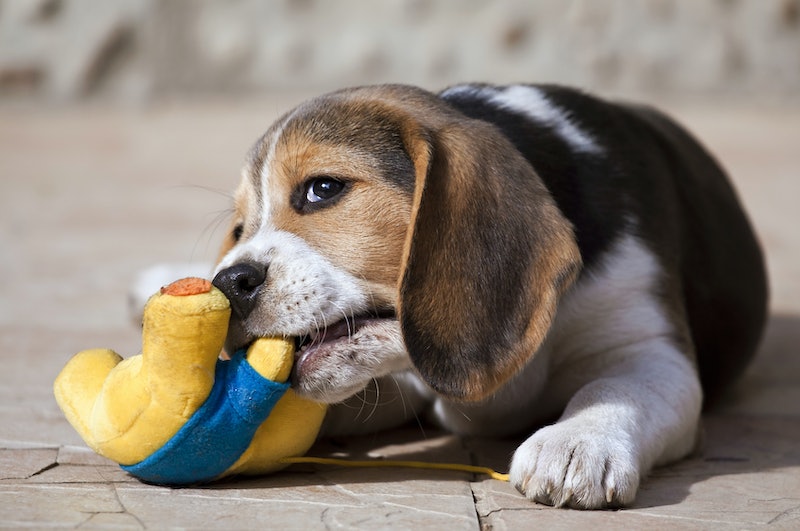 Back when I owned a TV, I was pretty good at keeping up with the remote — except for when that ASPCA commercial would come on, then it would magically disappear and leave me alone with all of those terribly sad animals (sobs). Well, if we went back in time, and a spot promoting Lost Dogs Home's "The Human Walking Program" had aired during an episode of The Nanny, I wouldn't feel the need to dramatically unplug my television in protest. Why? Because this animal shelter decided to put a genius spin on the sad animal approach and encourage the adopting of sad humans by awesome shelter dogs, according to UpWorthy. Too. Amazing.

The Human Dog Walking Program was started to provide animal companions for full time office workers — and give them a break. According to The Lost Dogs Home’s site, studies show that long working hours can result in "extra stress, poor family relations, and a lower quality of social relationships." The solution? Animals, of course.

In an effort to encourage healthy living, the shelter sets up events in parks near offices, where employees can take a break from their teeny cubicles and sad desk lunches to play and socialize with these shelter dogs. Like I said before, genius.

Also, there are no sad dogs in sight. Look at how happy this one is:

HowStuffWorks mentions that multiple studies suggest that not only does adopting a pet relieve stress, but it also lowers blood pressure. One even shows that anxiety can be lowered by 37 percent when you incorporate a four-legged friend into your life. I think it's safe to say that The Lost Dogs Home took the best possible approach when it comes to finding dogs homes (or at least, the most logical one).

UpWorthy also notes the Australia-based dog shelter's efforts have been extremely effective so far. Thanks to the The Lost Dogs Home's program, nearly 5,000 dogs, er, I mean, humans, were rescued!

In short: sure these dogs need homes, but no one wants to be guilted into adopting an animal. The fact that owning one might make you a better person? So much more effective than the opening chords of In the Arms of the Angels (no offense, Sarah Mclachlan!)! That, and hanging out with dogs in a beautiful park sounds like an awesome way to spend a lunch break... maybe some Brooklyn-based shelters can get in on this?