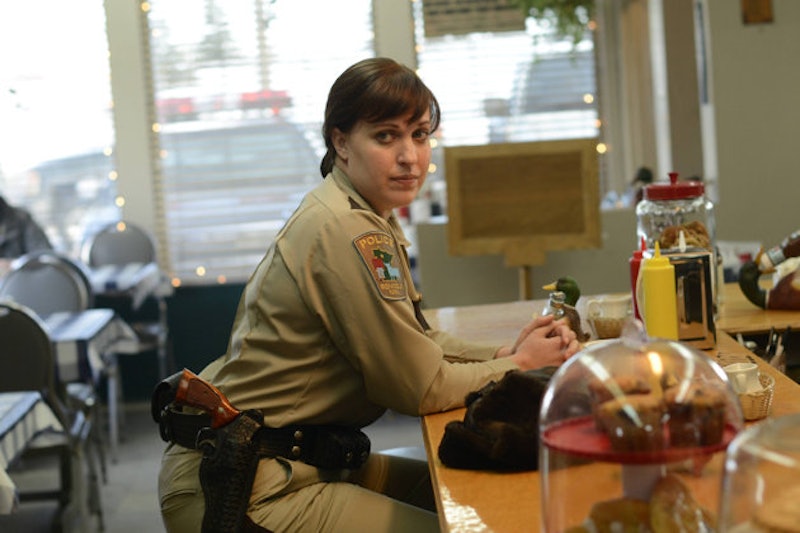 While the first season of FX's critically acclaimed new series comes to its undoubtedly bloody conclusion this Tuesday night, the network oddly hasn't renewed Fargo for a second season — but fans shouldn't feel too worried about the fate of their new favorite show. The fate of their new favorite characters, on the other hand isn't so secure. [UPDATE: Deadline reports that Fargo will return Oct. 12.]

Creator and showrunner Noah Hawley has been clear that if commercial success were the only factor in Fargo's longevity, the announcement would have been official ages ago. "Obviously in an industry like this, anytime something is a success, you think how can I make more money off of it," he said about Fargo's chances of renewal. So what's holding it up? "That said, my experience with FX is they’re very proud of the quality of the work, and their biggest concern is if we were to do it again, could we make it as good or better." So according to Hawley himself, the only reason a Season 2 of Fargo has yet to be green-lit is because he's waiting to make sure he has a compelling enough story to make another year worthwhile.

It's refreshing to see a decision like this being made for creative reasons and not monetary ones. (God knows the opposite is usually the case — just look at CBS' Under The Dome, an adaptation of Stephen King's novel conceived as a limited-series event, which was renewed for a second season after decent ratings... only to have the show collapse under its own increasingly ludicrous weight.) But assuming that Hawley does come up with another terrific idea and that FX does renew Fargo, know that Season 2 is going to look very, very different than what we've come to know.

Here's one thing we do know: a hypothetical second season will definitely NOT be a continuation of this year's plot. The convoluted case of Lester Nygaard and Lorne Malvo will come to its irrefutable conclusion Tuesday, and these characters will not be back for more. But will a second season feature any of the same characters at all? It's not likely.

Although some had theorized that detective Molly Solverson would be the single thread that tied the disparate seasons of Fargo together, it doesn't look like our can-do cop will be back for more. But why not bring back such a beloved character, especially when she could help ground a new story? Realism, Hawley says:

We're saying it's a true story, which it isn't, but it's following a certain true story logic, and it would strain credulity I think to have the continuing adventures of Molly and Gus with [a new storyline of] 'What crazy Coen Brother case are they going to catch next time?'

There could be some familiar faces.

Just because Molly, Lester, and Lorne won't be coming back for more shenanigans doesn't mean that there will be zero familiar faces if or when Fargo returns for a second season. While nothing has been set in stone at this point, it's possible that some actors will return for the new season, albeit in new roles — a la FX's other popular anthology series, American Horror Story.

There are a few actors we know won't be returning: Billy Bob Thornton only signed a one-season contract, and Bob Odenkirk is heading over to AMC to star in their Breaking Bad spinoff Better Call Saul. But that doesn't mean that no one will return. One definite possibility? Molly's portrayer Allison Tolman:

I know that they’re discussing it, and discussing if they do have a second season, or a second installment in the anthology, which actors might make it through to another season. [...] I’m just kind of sitting tight until they let me know exactly what’s actually happening.

While it sounds like nothing has been decided yet, Tolman's words certainly make it seem like she's game for another round of Fargo if Hawley and FX invite her back. Fingers crossed.

One intriguing possibility that has been mentioned is the idea of Season 2 being a period piece. When discussing what a second season would look like, Hawley responded:

It doesn't have to be contemporary. The sky's the limit as far as the history of true crime in Minnesota.

Now, Hawley may just be spitballing here or reinforcing the point that the two seasons will be completely separate, but the idea of a period piece is intriguing. And just because it might not be "contemporary" doesn't mean we have to reach all the way back to the 1800s or anything. Heck, technically speaking, the first season of Fargo already was a period piece — it took place in 2006, which sounds recent to most of us, but it was actually almost a decade ago.

Just because next year will feature a new story with new characters doesn't mean there would be zero connection between the two seasons. Hawley has mentioned that Season 2 will likely be tangentially related to the original film in the same way that Season 1 was, which would firmly place both outings in the same world.

What would that connection look like? Will someone run into Jerry Lundegaard in prison? Will we meet Marge Gunderson's offspring? Will the infamous wood chipper make a surprise reappearance? Unclear. But what is clear is that Hawley is 100 percent committed to making Season 2 of Fargo as thrilling as the first. We can't wait.