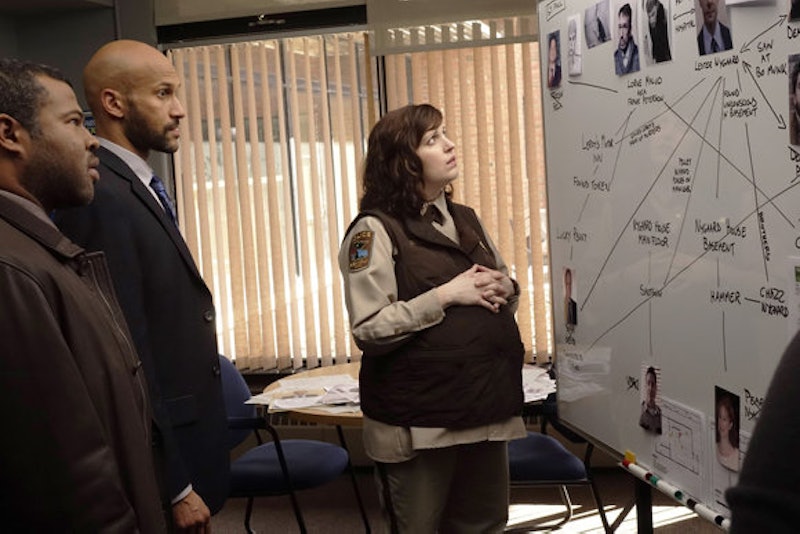 The Coen Brothers are a beloved and award-winning filmmaking duo widely known for their distinctive style — and their 1996 crime comedy Fargo is a classic example, containing the writer/directors' infamous quirky characters, snappy dialogue, and bleak sense of humor. One of the triumphs of FX's Fargo , then, has been its ability to capture the spirit of that classic film. Sure, the Coen Brothers serve as executive producers on the new show, but they don't actually have a hand in writing or directing any of it. Most of the credit is due to showrunner Noah Hawley, for replicating the Coens' distinctive tone so masterfully.

Fargo the show and Fargo the film do have a lot in common: the snowy Minnesota location, the shockingly bloody murders, and the cast of characters containing the likes of a can-do female detective, a family-man-turned-criminal, and some unscrupulous fellows from Fargo, North Dakota. But the similarities pretty much stop there. Fargo the show isn't a remake, reboot, or sequel to the film — Fargo simply takes place in the same Coen-esque world. There's no character named Marge Gunderson, no kidnapping gone wrong, and nary a woodchipper in sight. (Not yet, at least.) But then Molly's dad starts talking about the crimes he saw as a cop once upon a time and we start wondering: Where exactly do the two properties intersect?

The reason that Billy Bob Thornton's deliciously evil Lorne Malvo was passing through smalltown Bemidji was because he was on his way to help grocery store magnate Stavros Milos (played by Oliver Platt) get to the bottom of a blackmail note. The blackmailer claimed to know about "the money." In a flashback, we learned that Stavros happened upon a suitcase full of money buried in the snow on the side of the road after his car broke down. He made the lucky find after glimpsing a red ice scraper stuck in the snow by a nondescript fence. Stavros took the money for himself and used it to start his company (which takes us up to the "present day" of the show: 2006).

Rewind ten years. Carl Showalter (Steve Buscemi) has been hired by Jerry Lundegaard to kidnap Jerry's wife Jean and demand a hefty ransom from Jean's wealthy father. After a botched handover, Carl has been shot, Jean's father is dead, and Carl finds himself with a suitcase full of money he doesn't want to share with his partner. So he pulls off on the side of the road, buries the suitcase in the snow, and marks its place with a red ice scraper.

Unfortunately for Carl, his unpredictable partner ends up murdering him and feeding his corpse to a woodchipper. The only person who knows the location of the $1 million is mulch... until Stavros happens across it.

This week, viewers will be teased with another possible connection between the two works. (Mini-spoiler ahead.) Molly Solverson's dad Lou, who we've known as the affable owner of the diner that Molly frequents, actually used to be a cop, before trading in his uniform for an apron. In the episode, Lou tells Lorne a story about a crime he worked when he was still an officer. For a minute, it sounds like he's referencing the events of Fargo the film. Sadly, it turns out to be misdirection, and he's talking about a different case entirely... But that doesn't necessarily mean a connection there is impossible. He's a former cop and the Lundegaard kidnapping had to have been one of the most infamous crimes in the are while he was working. Surely he must remember it. Perhaps he even knows someone who worked the case...? (End spoiler.)

Marge and In Charge.

If Fargo the show truly does exist in the same world as Fargo the film, then that means that Marge Gunderson (Oscar-winner Frances McDormand) is presumably still out there somewhere. How awesome would it be to see her pop up before the end of the season? Molly was clearly conceived as a sort-of-avatar for Marge (and now that Molly is pregnant, the parallels are even more obvious), but that doesn't mean Marge has been wiped out of existence. Surely her experience handling unusually bloody crimes in small town Minnesota would be valuable to Molly in her quest to bring Lorne and Lester to justice?

While we're not sure Noah Hawley will ever get so explicit with his show's connection to the film as to bring in Marge, we're definitely hoping for a cameo from McDormand. And with the revelation about Lou's past, there's a ready-made way to write Marge into the events of the series. Fingers crossed? You betcha!