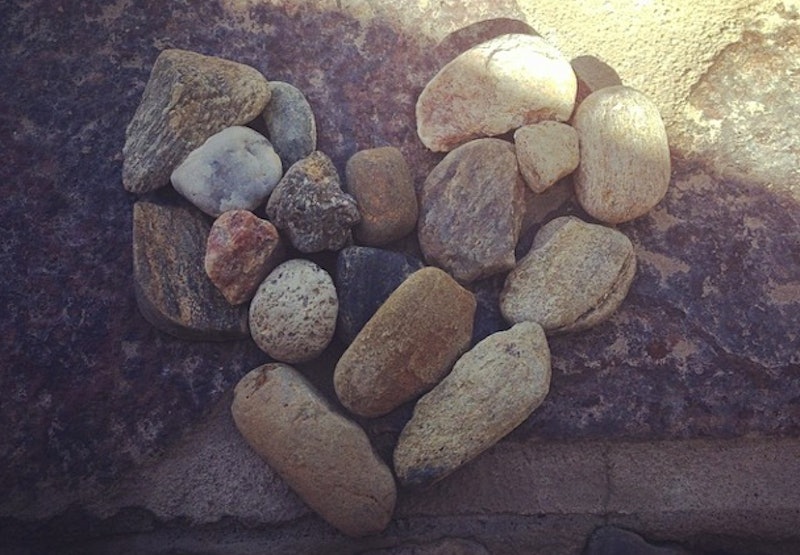 There was something missing from the season finale of Game Of Thrones. A lot of people are very upset about it. So why wasn't it there? (Spoilers follow) Where was the angry corpse of one Catelyn Stark? According to one Game Of Thrones director we should never have expected her in the first place.

Two months ago Cersei Lannister actress Lena Headey posted something very titilating on instagram. It was a bunch of stones arranged in the shape of a heart. Everyone and their A Song Of Ice And Fire reading mother thought that this meant for sure that Lady Stoneheart — the reanimated Catelyn Stark — would be making an appearance in this season of Game Of Thrones, probably as the vaguely disgusting closing shot of the season. And yet she was nowhere to be seen. Twitter was, as is expected, very upset by her lack of presence.

So what the hell was up with not including her? Alex Grave, who directed the episode, seemed puzzled that the public's even asking. As he told Vulture:

Well, she was never going to be a part of it. I know it caught on on the internet, and people really started to believe it. I think the bottom line is that there was so much going on, at least from where I stood, that it wasn’t something to get into because, you know, when you get into taking Michelle Fairley, one of the greatest actresses around, and making her a zombie who doesn’t speak and goes around killing people, what’s the best way to integrate that into the show? I don’t think there was room for it this season. I don’t know what they’re going to do about it, because it is certainly something people attached to. I was attached to it because I established Thoros of Myr and Beric Dondarrion last year in the story to rejuvenate her. I have no idea what they plan to do about that because honestly, it just wasn’t talked about. It wasn’t on the radar.

In fact he barely sees the point of Lady Stoneheart at all:

From what I know of the books, it’s like, Okay, what’s she really there for? Because I think she goes around — and it’s vague to me because I haven’t had to direct it, so I haven’t looked at this in detail — but essentially she’s a reaction to the Red Wedding. Part of the reason I think people got so wound up with her coming back, I think, was because of the emotional toll of the Red Wedding, which I totally get. Like, Bring her back and have her kill some people! Joffrey’s death was meant to play to that need a little bit. And also Tywin’s.

He might be missing something big on that front, though. It'd be naive to say that bloodlust plays no part in Game Of Thrones — most of the truly squeamish and those who prefer their stories less deadly jumped ship loooong ago. But it wasn't just that audiences wanted to see certain characters killed off in revenge to past actions: It's that zombie Catelyn Stark sounds fucking badass. Grim and grisly and depressing, yes, but that's hardly out of character for a show that killed off a fan favorite this season by crushing his head like a grape in front of us. In fact, if the scene had been included it might have complimented many of the motifs of Game Of Thrones Season 4 rather well.

As for space, Game Of Thrones has proven its willingness to juggle an overwhelming amount of storylines before, giving more or less screentime to certain ones based on their impact and other factors. Lady Stoneheart isn't a character who demands to eat up all our time, but she is one who it might have been worth it to see, if not for the interesting flavor she adds to the Stark story than for the role she plays in the story going forward.

To be honest, I could have given up a few minutes of the skeleton-vs.-child-ice-nymph battle going on in Bran's storyline if it meant I got to see the makeup and CGI that could have made the image of Lady Stoneheart really memorable.