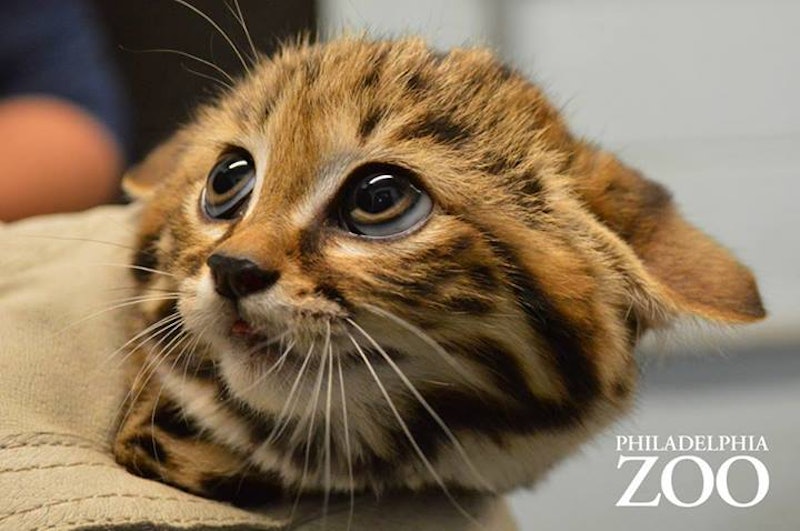 Prepare to squee: The Philadelphia Zoo welcomed the first-ever black-footed cat kittens born onsite on April 8, 2014 — and if the pictures they’ve recently posted to their Facebook page are anything to be believed, they’re some of the most awww-worthy baby cats ever. Seriously, you guys. Look. Just look. They’re so cute I can barely stand it. For reals.

According to the Feline Conservation Federation, black-footed cats are one of the world’s smallest wild feline species. They only weigh between 2.5 and 4.5 pounds, and they tend to be about 19 to 24 inches long. They’re native to the arid grasslands of South Africa, Botswana, Namibia, and Southern Angola; they’ve also been listed as "vulnerable" by the International Union for Conservation of Nature since 2002. The pads on the bottoms of their feet are black, giving them their name.

In an effort to prevent the species from becoming endangered, the Philadelphia Zoo houses an adult black-footed cat named Aza. Back in April, Aza gave birth to a litter of three; now about nine weeks old, the kittens weigh just 27 ounces. Also, they’ve all been named after Daenerys’ dragons from Game of Thrones/A Song of Ice and Fire. That’s right: You’re looking at little Drogon, Rhaegal, and Viserion right here. Best. Names. Ever. They just got moved into their new exhibit home, and they seem to settling in nicely.

Zooborns reports that the zoo baby-proofed the kittens’ exhibit ahead of their big debut: The water level has been lowered and climbing structures have been added; their mother, Aza, has a second feeding dish so she can eat separately from her kittens, and the kennel the babies have been sleeping in has been moved inside the exhibit so they have a safe and familiar place to go in their new habitat. There’s also a keeper present throughout the day, monitoring them to make sure they’re adjusting to the environment, although judging by these photos, I don’t think there’s anything to worry about:

If you live in the Philly area, you can find out more about visiting them at the Philadelphia Zoo’s official website; regardless, though, I highly recommend watching the video below. Because everybody needs more kittens in their lives.