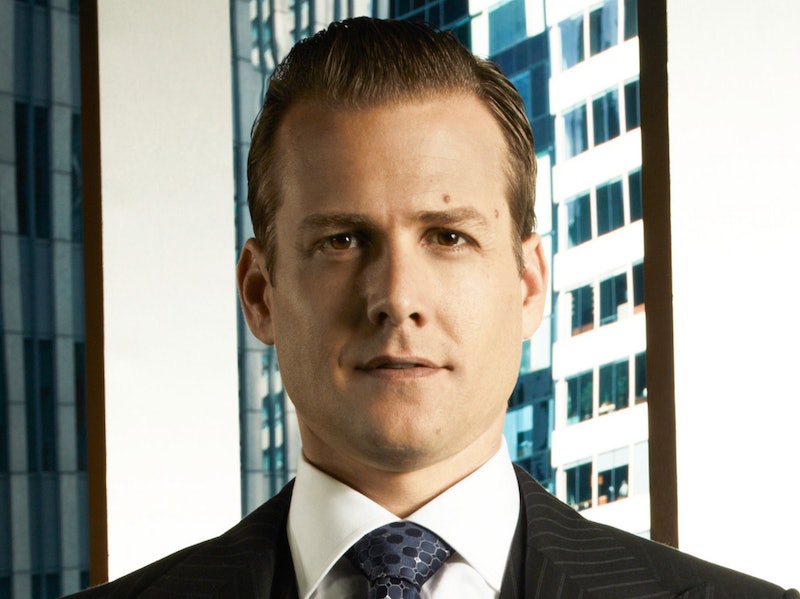 Ever since Mike spurned him, Louis Litt has been even grumpier than usual, abusing his quartermaster powers to deny Ross his otherwise unalienable right to coffee creamer. Cruel and unusual punishment. To heal Litt's wounds, Harvey encourages him to have a professional fling with a "rebound" associate. But who? The ever-enterprising Katrina Bennett offers him some unsolicited helpfully assembled research, and Litt responds by offering her a "symbiotic relationship, like between a phytoplankton and a whale." She claims she's not interested in becoming his—or anyone's—personal associate.

DA (short, in this case, for Douchebag Attorney?) Cameron Dennis arrests Harvey's client Ava Hessington on a charge of conspiracy to commit murder, based on deaths tenuously linked to foreign officials she admittedly bribed.

But just how tenuously? Mike susses out that the victims were leaders of a protest movement against her pipeline, and that they lost their lives on her company's private property. Though Hessington denies any wrongdoing, Harvey's skeptical. But a case is a case, and he wants to win as much as ever.

Though Mike and Harvey are working together again, they're still not on the "Butch and Sundance" terms that Ross—maybe a little spoiled by Litt's courtship—would prefer. He bristles when he discovers Katrina sniffing around his mentor's office, trying to curry even more favor by preparing briefs for his cases, too.

Harvey's day is interrupted by the arrival of Stephen Huntley, a suave senior partner from the London office. Though Huntley explains that he's Darby's fixer, only there to lend a hand, Harvey isn't having any of it. These dudes are way too similar to get along. But from the moment Huntley and Donna see each other, it's game on. They communicate exclusively in sexy banter: "This isn't over." "Is that a threat?" "You take it in whatever tone pleases you the most."

Katrina circulates an embarrassing JibJab-style animation of Mike dressed as a baby throughout the firm. She presents it to Litt as a symbol of her loyalty. Though Mike is tempted (oh, so very tempted) to strike back, Harvey insists that he let it go, and ends up dressing down Katrina himself. Duly chastened, she signs on as the newest (and only?) member of Team Litt.

Hessington, having copped just last week to bribery, suggests they get out of their current predicament via—wait for it—bribery. When Harvey resists, she fires him. But because this is Harvey, that doesn't mean he's going to stop. Before Specter and Ross can reach Ava with a new plan, they spot her in the company of Huntley. Has he betrayed Harvey?

Nope. Turns out Huntley has his back. Not only did he discourage Hessington from bribing the witnesses (probably not the best idea), he advised her to rehire Harvey. She does.

But there's no time for celebration. It looks like Butch and Sundance may never come back—Specter tells Ross about his deal with Darby to steal the firm from under Jessica.

As Donna leaves the office, Huntley pulls up in a glamorous convertible with front-row tickets to Macbeth. She narrowly manages to resist his advances. As he drives away, she sighs, "I'm in trouble." In other romantic news: Mike, on bended knee, officially asks Rachel for her hand in girlfriend-dom. She accepts.