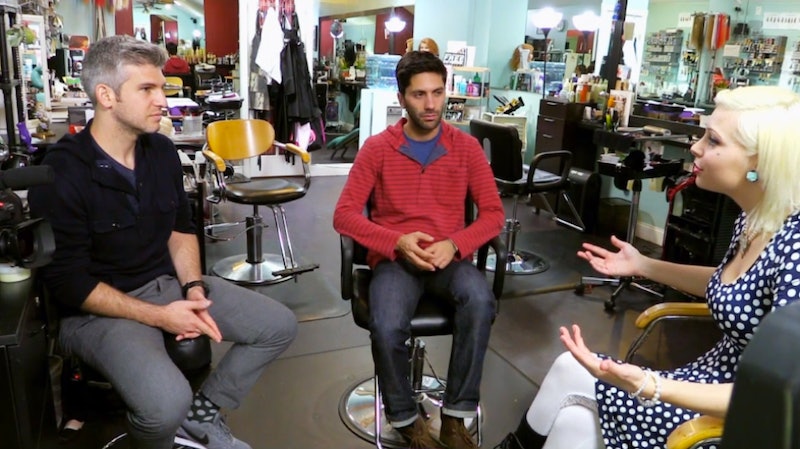 Here we go again. Another new episode of Catfish , another love triangle. When will people learn that if you've got something good going IRL, you don't need to be (not to mention, shouldn't be) talking to someone else online who may not even exist? But then again, if people followed that advice, we wouldn't have many of the stories that appear on Catfish. Wednesday night's Catfish focuses on Solana & Elijah, a relationship that actually goes way back.

Solana, an 18-year-old from Ocean View, Delaware has been talking to Elijah on Facebook and through a texting app since they first met on MySpace when she was just a tween. Through messages on the site and talking on the phone, Elijah offered Solana support as she dealt with her parents' recent divorce and life in a new town. Then one day Elijah and his MySpace profile disappeared. It wouldn't be Catfish without a dramatic exit, now would it?

Then two years ago, out of nowhere, Elijah reconnected with Solana on a social network people still actually use, Facebook. Elijah's excuse was that his mom had put him on "lockdown," taking away his access to pretty much all forms of communication. It seems like they were able to pick up right where they left off, but now, Elijah doesn't have a phone (weird), so they haven't spoken to each other in years—again. As is the norm on sketchier episodes of Catfish, Elijah doesn't have a webcam either, so Solana has never video chatted with him.

Oh, and to get back to that whole love triangle thing, Solana met her boyfriend Danny a few months ago to complicate everything even further. She doesn't know if she wants to get more serious with Danny or pursue a relationship with her longtime love Elijah instead. Fortunately for Solana, Danny just wants her to be happy, and he's been very supportive of her appearance on Catfish to discover who Elijah really is. But the thing with love triangles is, whether they're IRL or online, someone is bound to get hurt.

We've definitely heard this one before on Catfish. Back in Season 1, Kim broke up with her boyfriend Scott, but she didn't get together with Matt, who she had been talking to online for a decade. They ended up as just friends because he had lied about his weight online. In Season 2, Dorion had to choose between his girlfriend Raffinee and Jeszica, who he had been talking to online. When Jeszica actually turned out to be a completely different woman named Alexis, Dorion chose Raffinee. But you have to wonder what he would've done if his catfish actually turned out to be genuine.

The weirdest love triangle had to be with Artis and his online love interest Jess, who were both involved in relationships at the time. In the oddest reveal yet, Jess was actually a man named Justin (cue epic slow clap), who began his online relationship with Artis to teach men like him a lesson about cheating. Artis and Justin never spoke to each other again, but in Catfish's epilogue, Artis said his relationship with the mother of his children had been improved since the show, so that's something.

So maybe the Catfish love triangles haven't been so destructive—so far, at least. It's just a little mind-boggling how people actually consider throwing away perfectly good relationships that they have offline to pursue something with someone they've never actually meant. Maybe they're just really optimistic, but then again, the actions of everyone who appears on Catfish tend to be rather questionable.