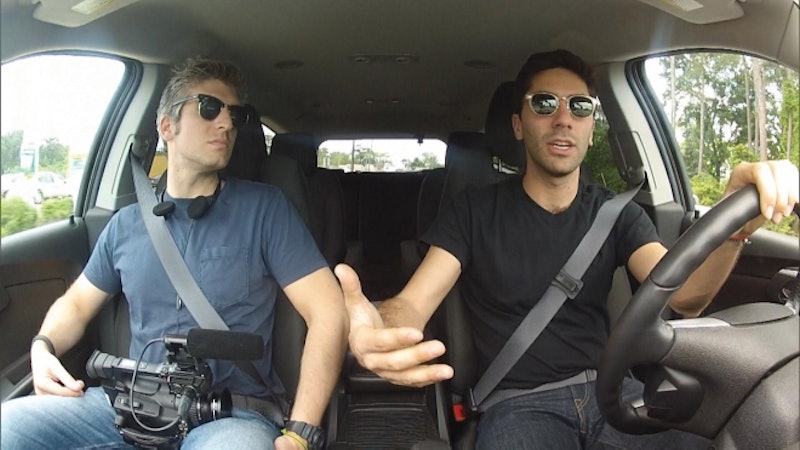 It was almost cruel of MTV. The network premiered a new episode of Catfish Sunday, but, before we even got the chance to discuss how completely insane it was, Miley Cyrus humped a foam hand for five minutes straight.

Because Sunday's Catfish was almost as insane as Cyrus humping a foam hand. But now that we're fielding a Video Music Award hangover, and coping with our disappointment over 'NSYNC's all-too-brief reunion, it's time to broach the subject again. Because we really, really need to talk about Sunday's Catfish.

Earlier in Season 2, the documentary series focused on one woman who had broken off an engagement in order to stay close with her Internet love, who she never met or saw via video chat, despite the fact that their relationship had spanned eight years. When we discovered that, for the first time, her online love interest was actually exactly who he said he was, we thought we had seen Catfish's craziest moment ever.

We were so, so wrong.

That came Sunday night, in the last 20 minutes of the new episode centering on Artis, a man in a dying relationship who had fallen for his online love interest. That his online love interest ended up being a man, Justin, was hardly a surprise — as soon as Artis revealed "Jess"'s porn-y pic, it was clear she didn't exist. Instead, our mouths all collectively gaped open the second Justin approached Artis with a slow clap. That's right — a slow clap. No joke.

It was a full 10 minutes before we truly understood why Justin had catfished Artis — after claiming he was not gay (and then hinting that, actually, he may be), Justin said he had created the fake profile in order to catch men cheating on significant others online. Why he had decided to do so? It might have had something to do with Justin supposedly discovering his father's dead body, or because he might have been homeless, or for some other reason, but whatever you do don't ask him if that's his dog.

The catfisher was so confounding, audiences couldn't even get closure at the episode's end — it might have been nice to see Artis rekindle his flame with his ex, but Justin's final video chat with Nev and Max proved we still were unsure about Justin's motivations. Was Justin legit? Or was he an actor or TV fan taking advantage of an opportunity? Based on his excitement discovering Nev had contacted him, and this tweet from Max, it might seem so:

The episode was a shocker, no doubt, and one of the more entertaining entries in the Catfish cannon. That said, it didn't quite restore humanity the way many Catfish episodes do. Nev and Max tried their darndest, but Justin's motivations were questionable at best. It was bizarre enough to make you wonder: Would Justin exist if not for Catfish? Instead of exposing (misunderstood) monsters, is the show creating them?

And, if they're all as entertaining as Justin, would we care?