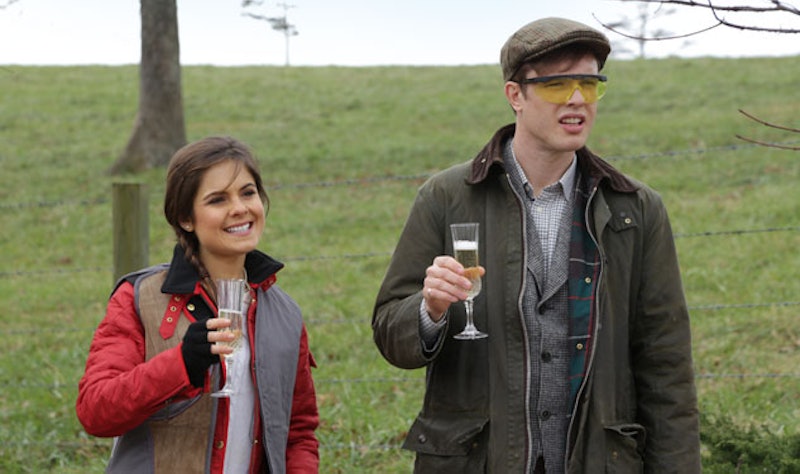 Move over, William and Kate — we've got a new favorite royal duo to obsess over: Almost Royal 's Georgie and Poppy Carlton, two distant descendants of the British Royal Family. The extremely privileged brother and sister are heirs to Caunty Manor in Norfolk, England, and they have graciously agreed to let a camera crew follow them around as they tour America. And why are they touring America? Well, because their father accidentally killed himself — he shot a gun and the bullet ricocheted off of a gun safety sign and hit him in the face — and they're honoring him by visiting America, since, according to them, he was quite fond of the country. Wait. What? Okay, I might've left out one important detail: Georgie and Poppy are fictional characters.

Of course that means the siblings aren't actually royal, because they're not actually people. As it turns out, they're characters thought up by BBC America for the network's first original comedy series. Poppy and Georgie are actually played by real-life comedians, Amy Hoggart and Ed Gamble, and they're no closer to ruling England than Kim Kardashian is. (I hope that statement doesn't come back to bite me in the ass. For all we know, Kanye could be planning a coup right now.)

Still a bit confused? Think of it as Borat but with way less nudity and vulgarity (like almost none at all), an extra dose of prim and proper English manners, and a splash of naivety and snobbery. Basically, the show follows Georgie and Poppy —who, according to BBC America, "have never worked a day in their lives, driven themselves anywhere or solved any problem more complex than telling their butler to tell their cook what they want for lunch" — as they travel through the US and interact with real Americans. What results is a wonderful mix of both British and American stereotypes being mocked.

But, guys — I don't think you really get how amazing Georgie and Poppy are at life. To give you an even better idea of how their spoiled and sheltered minds function, take a look at some of the questions BBC America asked the out-of-touch brother and sister in a mock-interview:

"Who are your heroes in real life?"

Poppy: My heroes are people who have achieved everything against the odds and are an inspiration to us all. I can’t think of any examples right now.

I bet Poppy's university applications were filled with just as wonderful vague responses.

"What is your motto?"

Georgie: Ah, I know this one. It’s something in Latin. Venti Latte or something like that. Latin was never my strong suit at school.Poppy: Don’t be afraid to be yourself, if you like toffee yogurt, eat toffee yogurt. That’s what I always say.

"What is your current state of mind?"

Poppy: Ready to seize the day. Or maybe go back to bed. So, contrary but open…Georgie: I’m quite hungry.

At least they're honest. Well, as honest as two actors pretending to be someone else can be.

"What is your most treasured possession?"

Poppy: Gosh, I’ve got so many. My handbag. It’s full of lovely things.Georgie: I think I’d have to say Father [gestures to urn]. Since he died, it’s been lovely to have him around all the time and I’ll be honest – he’s much more manageable like this.

For even more of the faux-royals' views on life, and to see them interact with random Americans, check out the premiere of Almost Royal on Saturday, June 21 at 10 p.m. on BBC America.