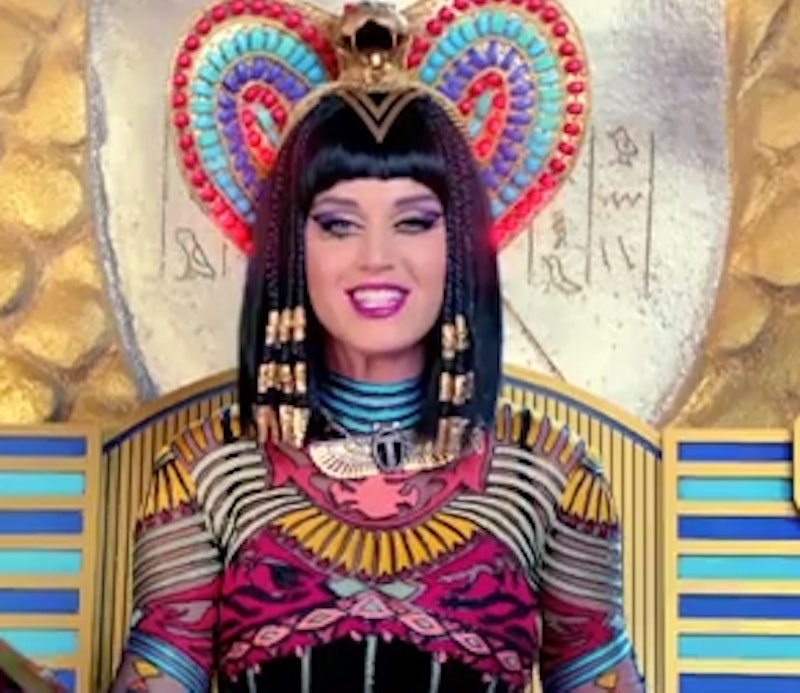 Say what you will about Katy Perry's music videos, but hold your tongue 'til you see "Dark Horse" without any music. It's kind of creepy, kind of weird, and also... kind of fascinating. Either way, it's a hell of a lot less nightmare-inducing than that version of Pharrell's "Happy" without any music (which was very, very, very creepy, but you just couldn't look away from those silently dancing minions).

This appropriation of the video only adds to its reception since it was released. Remember back in February, when Perry & Co. had to alter the YouTube video after she offended someone with a "Allah [...] engulfed in flames" necklace? And prior to that controversy, the video already had irked many folks with it's "haaaay guys, it's Egypt 101 plus candy and glitter!" aura. Of course, Perry probably wanted it to be kooky (or she wanted to wear an Egyptian headdress, who knows), but the point is, this video hasn't been a favorite in the industry. But now, in the absence of any music, we get to judge it once again.

The #withoutmusic series is always pretty gripping in a weird way— there's something about watching these videos sans music that alters the visual experience. Further, while watching Perry's music-less "Dark Horse," you find yourself asking several questions in the absence of all of those musical add-ons and synths: Is that Katy Perry's voice? Or are we just so accustomed to heavy synths and musical distractions that we don't even know what the hell she sounds like anymore? Ah, pop music, you confusing but wonderfully weird entity.

You can see — and hear what's left — for yourself below: