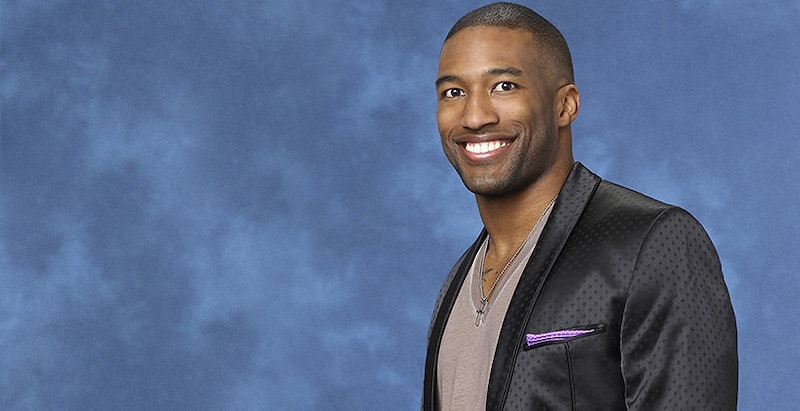 Turns out, we will be seeing more of Bachelorette contestant Marquel Martin after all. Unfortunately though, it probably won't be as the next Bachelor, because Marquel will be appearing on Bachelor in Paradise . You know, that spinoff show full of tearful fights and boozy hookups that aren't likely to lead to happily ever afters? America wanted a lot more for Marquel than that. After Bachelorette Andi Dorfman sent him home last week, many "Marquel for Bachelor" campaigns were started. Even former Bachelor Sean Lowe petitioned for him, tweeting after the show, "Too soon to start the Marquel for Bachelor campaign? Think about it @ABCNetwork."

Marquel deserved be the first black Bachelor, not for only his diversity, but for his charm, humor, charisma, and sensitivity. He was the total package and there's no doubt that America would have tuned in to watch his journey to find love.

Instead, we'll have to watch him deal with villains and fan favorites from seasons past as they all attempt to find love in a relatively small dating pool. The previously announced cast features seven ladies, which has now been bumped to eight with the last-minute addition of Michelle Money. She vied for Brad Womack's heart in 2011 and according to People, became known for her "seductive ways and jealous comments."

It's not that the eight women on the show aren't great, it's just that a narrow margin of people (one third of what a Bachelor picks from) makes Marquel's chances for finding love significantly smaller. Add to that the promo for the Bachelor in Paradise season, which features eight different shots of women crying interspersed with skinny dipping and alcohol guzzling, and the odds are even slimmer.

I was just hoping Marquel's shot at finding "the one" on TV would be a little more significant. He deserves to bring his charm into a starring role, not an ensemble one. Because hey, Marquel really wants to find a wife. In his tearful admission during last week's episode (which Andi totally refused to acknowledge) Marquel said "I'm not anything special, but I want love real bad." Like, was ABC even listening? He is exactly who they want in a Bachelor. He's equal parts hot and thoughtful and he's also funny. He would have been the perfect antidote to the horror show that was Juan Pablo's season. Just look at how much he loves cookies:

There's the very unlikely chance that ABC could still choose Marquel to be next season's Bachelor—but after two reality shows in a row (Bachelorette and Bachelor in Paradise), would he even want to do a third? Would that filming schedule even be possible?

When it comes down to it, if ABC really saw him in a Bachelor role, they would have waited before casting him on Bachelor in Paradise. Although they couldn't have known at the time how much people would love him, it still feels like ABC is placating us with his Bachelor in Paradise announcement. It's a pretty lame second place option when The Bachelor could have been on the table, and Marquel deserved more than that consolation prize. All that matters, though, is that he's happy.