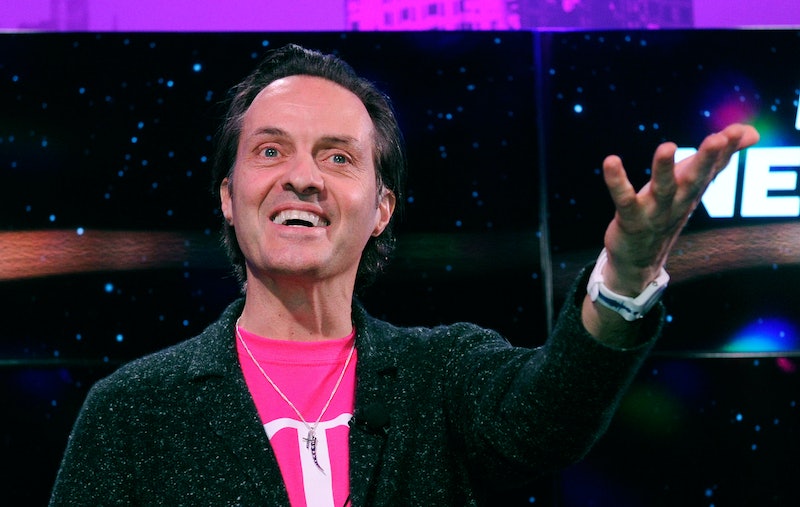 T-Mobile CEO John Legere has built a reputation on controversial statements and dropping f-bombs, and when you're the red-headed stepchild of the mobile industry, I guess there's a lot to be angry about. But this time he may have gone too far: At a company press event Wednesday, Legere said that AT&T and Verizon were "raping" customers.

These high and mighty duopolists that are raping you for every penny you have...the fuckers hate you.

Look, we get the whole "cool CEO" thing. Legere told Business Insider a few weeks ago that the profanity and penchant for off-the-wall remarks gives him a man-of-the-people reputation. "I don't walk closely up against the line. I ignore it. It's who I am," Legere said. "I may be a little rough and crude, but I'm much more like my customers and employees than I am an executive. I think employees relate to the way I speak, customers relate to exactly the way I think and talk. And it's who I am."

It's kind of a Mean Girls "I'm not like a regular mom, I'm a cool mom" thing, but if cursing is the only thing that you can do to let everyone know you're not a stiff, go for it, I guess. But this is where I disagree with Legere. I don't think using rape as a metaphor is something that makes him like his customers or employees, and to represent them in that way is an insult to the company at large.

I thought we'd long since learned that using "rape" in any other way but the literal sense is trivializing real-life trauma. Legere's lazy prose goes beyond an issue of being politically correct. It's an insult to rape survivors to be compared to high cell phone bills. Unless Verizon and AT&T are literally forcing themselves and physically violating customers, then Legere needs to watch his phrasing.

While I don't expect an apology from the "cool" CEO, I hope there's enough outcry to stop him from making these remarks in the future. Until then, we'll keep to the higher prices.

More like this
How To Support Gun Control Reform Right Now
By Morgan Brinlee and Carolyn Steber
What Is Mandy Moore’s Net Worth?
By Hugh McIntyre
Ryan Seacrest's Net Worth: 'American Idol' Makes Up Only Half Of His Wealth
By Hugh McIntyre
Danny Dyer & Ellie Taylor’s New Netflix Game Show Is All About Cheating
By Rachel Mantock
Get Even More From Bustle — Sign Up For The Newsletter