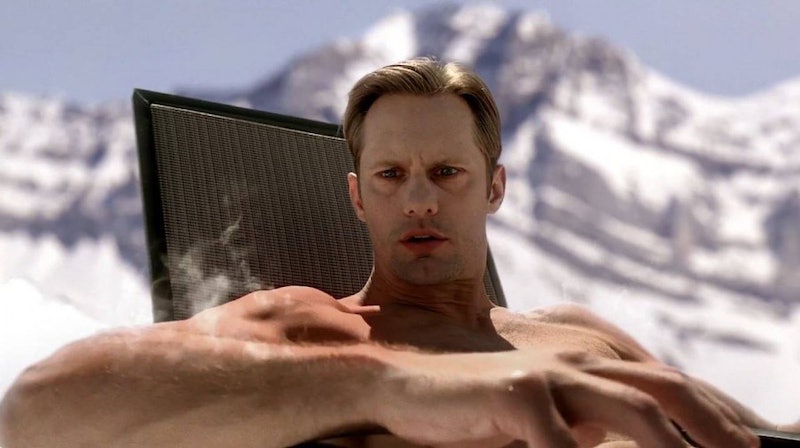 This HBO series tests us in so many ways, but Eric Northman's "death" scene in True Blood 's insanely crazy Season 6 finale was one of the most bittersweet moments in recent memory. On the one hand, we got to witness the gorgeous Viking vampire sunbathing nude on a mountainside in Sweden. On the other hand, the scene ended with him burning alive because the daywalking abilities in his blood had worn off when Warlow was staked half a world away. (Confused by that sentence? Don't worry, True Blood hasn't really made sense for a while now.)

One of the biggest questions going into the seventh and final season of True Blood surrounds the fate of our favorite blonde bloodsucker. Did he meet the True Death on that mountain? Or is he still out there somewhere, perhaps a bit charred... but very much alive? (Or technically undead, I suppose.) With a body count that rivals its network sibling Game Of Thrones, True Blood has never shied away from offing its characters in spectacularly gory fashion. This past season alone saw the True Deaths of Luna, Nora, Terry, Steve Newlin, and Warlow. And reports claim that yet another major character will be dead before the opening credits even roll in the Season 7 premiere.

But surely the writers wouldn't be crazy enough to kill off their biggest hunk of eye candy right before the show's final season, right? If he has to die, at least give him a noble, self-sacrificing death in the series finale. Turning into extra-crispy bacon on a lonely mountainside isn't a fitting enough end for badass Eric. And thankfully, it looks like we haven't seen the last of him.

One sure sign that the Swedish vamp will be back for more is that actor Alexander Skarsgård is still a series regular. Sure, it's not unheard of in the history of television for someone in the main cast to not technically be alive — James Remar spent eight seasons of Dexter dispensing ghostly advice — so we suppose it's possible that Eric will live on only in memories/flashbacks/Jedi-ghost-form. But who are we kidding? They're not bringing Skarsgård back to linger on the sidelines for ten episodes.

At the end of Season 6, Pam left Bon Temps to search for her missing maker. We know that her storyline in the first couple episodes this season will revolve around her quest to find Eric. And the title of the second episode seems like a big, fat spoiler to us: "I Found You." Whether or not Pam will be successful in convincing stubborn Eric to return to Bon Temps is a whole separate issue, but it seems all but confirmed that he will be discovered alive and well at least by the season's second hour.

Eric's getting some new lovers.

A new character named Sylvie will appear in the second episode as Eric's new love interest: she's described as being in her 20s, drop dead gorgeous, and fluent in French. Gabrielle Wright ( The Tudors ) was cast in the role, and while we don't know how long Sylvie will be sticking around for, the fact that Eric is being given a new lover is a pretty good sign. And Sylvie's not the only character we'll see Eric gettin' jiggy with, either. According to reports, there's a steamy sex scene (also in the second episode) between Eric and Jason. Yes, you read that correctly. The hookup is undoubtedly a result of the blood Eric gave to heal Jason last season ("You’re in for a treat, my friend. When you dream of me, dream of nice things," the vamp said to the human), but that doesn't mean we're not still looking forward to seeing this unexpected pair in action.

There's a twist in store for Eric and Sookie.

Entertainment Weekly's review of the new season teases that, "There's a clever twist involving Eric that could set up an exciting arc for Sookie." The reviewer refuses to explicitly reveal whether or not Eric is alive, but our definition of a "clever twist" wouldn't really be Sookie finding out that he's dead. Hopefully this is a sign of some juicy drama brewing between the faerie waitresses and the Viking vampire — they're a fan-favorite coupling, and if we don't get to see them make out at least one more time before the show ends, there might be rioting in the streets.