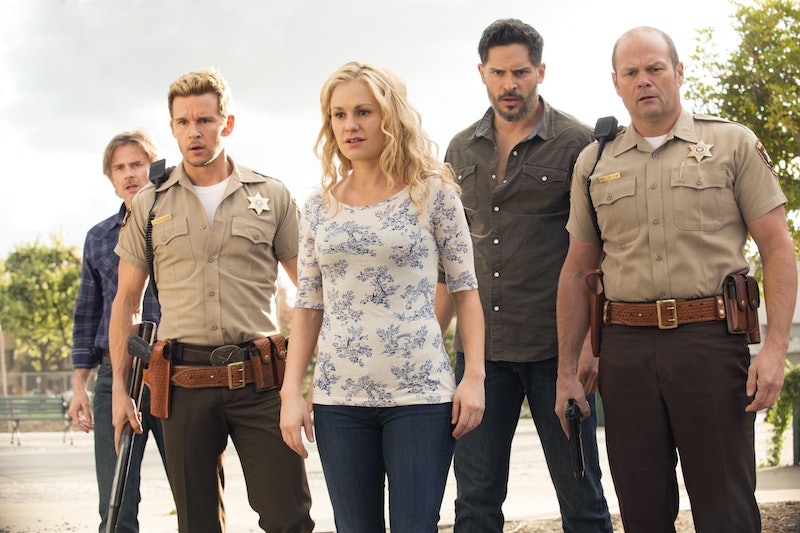 It's that time of year again, people. We're going back to Bon Temps — whether you like it or not — for the mother of all vampire dramas. HBO's True Blood Season 7 will premiere on June 22 and even if you hated the past few seasons (I feel your pain), you'll be happy you tuned into the show's final season. Because, well, I just have to know whether or not Sookie will finally get killed off or whether she'll choose Bill, Eric, or Alcide to settle down with in the unfortunate event that HBO lets her live. So how will you tune in on June 22? We've got it all figured out for you, blood-bags, vamps, fae, and shape-shifters alike.

I know, you can't imagine sitting through another season of True Blood — even after Alexander Skarsgård's full-frontal during the Season 6 finale. (Hopefully you didn't miss that.) But, if you've seen the series through from its premiere in 2008, how are you just not going to watch the final season? Especially after this tripped-out first trailer that really has all of the shit from the past six seasons hitting the fan all at once with Hep V vampires on a killing spree in Bon Temps. So, like all good vampires know — you've got choices here on how to get your True Blood fix on Sunday night. If not for anything more than to be able to chat with fellow Sookie-haters and Pam-lovers on Monday morning.

It seems like HBO's finally figured out — via two failed attempts during the True Detective finale and Game of Thrones Season 4 premiere — how to get HBO Go to work properly and not crash on subscribers mid-episode. So if you're one of the lucky HBO Go users, True Blood 's premiere will be available around 10:05 PM. At least, that's what Time Warner says. If you can handle staying off social media for 65 minutes (even though I can't imagine True Blood spoilers running wild, GoT-style), you'll be good to go.

The general rule with HBO series and On Demand is that the episode becomes available up to 24 hours after its initial airing. So, again, if you can stay away from social media for a night, you're all good — but you might have to stake someone at work to keep them quiet. Or you could just stay in your coffin all day like a real-life vampire, until you have time to catch up with the rest of the world.