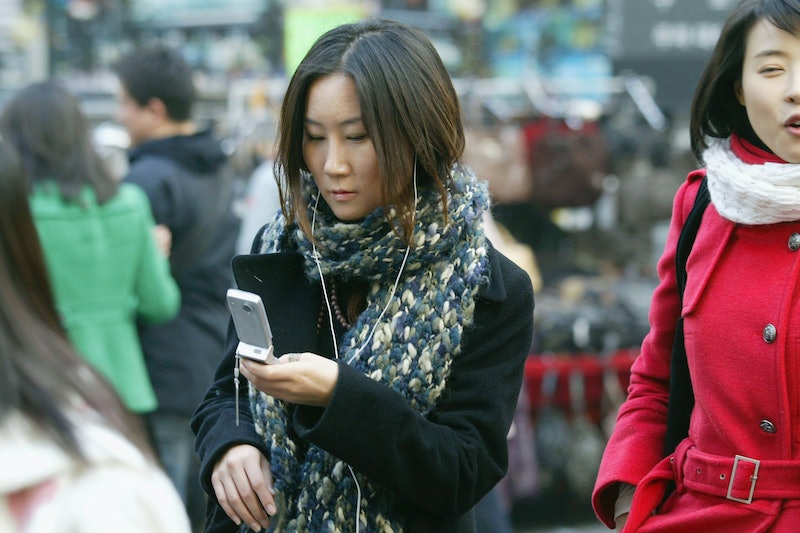 Okay, so obviously your entire relationship isn’t dependent on whether or not you text “LOL” to your SO regularly — but let us not underestimate the importance of text etiquette in relationships. In the spirit of that importance, good news, everyone! A new study is here to help us wade through the terribly confusing dos and don’ts of dating texting etiquette! Naturally it was conducted by a mobile phone carrier, because who better to tell us what we should or shouldn’t do while texting?

British mobile phone company TalkTalk Mobile teamed up with the etiquette experts at Debretts to survey 1,000 Britons about how they felt about certain texting behaviors from their dates or partners. It seems that 75 percent of the respondents believed that they have good mobile phone dating manners; however, four in ten people have apparently “completely misinterpreted a poorly written text,” and sarcasm tends not to translate well over SMS.

Said Dan Meader of TalkTalk Mobile to the Daily Mail, “[Our] work with Debretts means that we’re able to go one step further towards helping out Britain’s daters mind their manners. Nearly 70 percent of us know someone with bad phone manners — although only a fifth of us thought our own phone manners may be in need of improvement — so our top tips aim to help people weave their way through the web that is modern phone etiquette.” Added Jo Bryant for Debretts, “Mobile phones allow us to communicate instantly, with easy and spontaneity, but as the TalkTalk Mobile survey results show, consideration for others is essential for good mobile phone manners.”

In order to demystify the whole thing, here are 12 dating texting etiquette dos and don’ts drawn from the TalkTalkMobile/Debretts survey:

1. DO: Send the same amount of kissy faces to your partner that they sent to you

Apparently it’s considered a brush-off to send fewer kisses in return. Or something.

2. DON’T: Answer the phone at dinner

Not texting, strictly, but that doesn't matter. It's still rude.

It's a surefire way to make everyone in the theater get all Liam Neeson on your arse.

4. DON’T: Even keep your phone on while you’re at the cinema

Nothing kills a dramatic moment like the iPhone “Xylophone” ringtone.

5. DO: Respond to a text within two hours

Obviously there are exceptions to this rule, but don’t just not respond out of sheer laziness. At least acknowledge that you got the other person’s message. As a bonus, it also prevents the following scenario from happening:

6. DON’T: Resend the same text you just sent if you don’t get a response

8. DO: Text your partner good night when you sign off for the evening

You wouldn’t just randomly walk away from someone if you were talking to them face to face, right? Same goes for texting.

“Whatcha doin’?” is the worst phrase ever to have had a question mark tacked onto the end of it.

10. DO: Ask questions to jump start a conversation

Posing questions to the person you’re conversing with is good etiquette in any situation; it shows you’re interested in them. No one likes someone who just talks about themselves all the time.

11. DON’T: Break up with someone via text

Seriously. Constantly sending things like “LOL” and “IDK” will usually either make the other person lose interest, or make you seem “overly keen or too needy.” Or, y'know, like a tween girl. RIP my BFF Jill.

Now go forth and text!