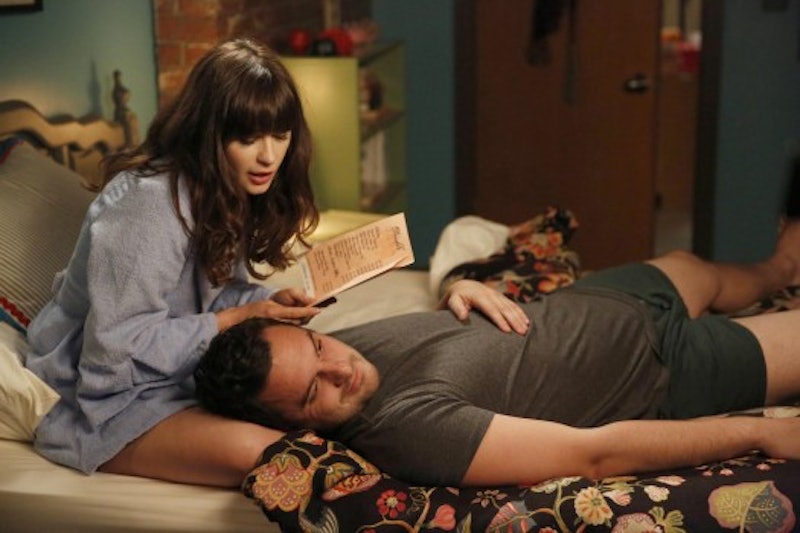 The last time we saw them, Nick and Jess may have been apart, but trust me, that's not going to last. Sure, they may think they're wrong for each other right now, but in actuality, New Girl 's Nick and Jess are meant to be together. So why aren't they still together? I've watched enough formula sitcoms to know how this is going to play out, and it's pretty obvious: When the show does inevitably end (which hopefully won't be until after at least ten more seasons), Nick and Jess's reunion will be at the center of the series finale.

I see what you're doing, New Girl writers, and I will not be distracted from the fact that your show is suffering from some major Ross and Rachel Syndrome. You know, where a show like Friends becomes aware of its will-they-won't-they couple way too soon, brings them together, and makes us all cry from the resulting fabulous chemistry before realizing that to keep viewers, they need to postpone the happy ending before they run out of story to tell. That's exactly what's going on here, and as much as I hate having my emotions played with, it's probably for the good of the show that Nick and Jess don't end up together quite yet.

Thanks to this fantastically '90s, Comic Sans-clad website that looks like it was created on AOL Dial-up, we have an incredibly comprehensive timeline of the Ross and Rachel relationship throughout the first six seasons of Friends, and it matches up almost exactly with where Nick and Jess are right now. From the time Chandler, Monica, Phoebe, and Joey chowed down on leg wax while listening in on their heartbreaking breakup — and for the record, they were not on a break — Ross and Rachel went back to making fans wonder if they would end up together. But while they were dating? There was no drama. There was Chandler cracking well-placed sarcastic jokes, and Joey losing more brain cells with every episode, but the show's central relationship wasn't giving us any development.

The Office managed to develop a relationship without breaking it up, at least for a while, by having Jim and Pam get married, have children, and deal with the reality of married life. Since New Girl is so character-driven, and those characters are so different from Jim and Pam, putting Nick and Jess together has served its purpose for now, and it's time to see them both take on different challenges. Like Rachel continued to build her career and Ross got married a few more times, Nick and Jess have some growing up to do, and we get to watch.

Plus, it leaves room for the B couple, the Monica and Chandler of it all, Schmidt and CeCe, to find their way back together. Even when they're together, they manage to clash in a way that's funny and completely endearing, since both of them struggle so much with stable relationships. Besides, I could watch Schmidt alone on screen sharing his snappy one-liners for 30 minutes a week and be thrilled, so if all else fails that's always an option.

I refuse to live in a world where Nick and Jess aren't endgame, because they're the first TV couple I've rooted for since Meredith and Derek tied the knot on Grey's Anatomy and became boring old married folks. There's just no rush to give them their happy ending before the show is ready, either by having better storylines for them as a couple or preparing for the end.

The real question isn't if Nick and Jess will end up together or even when, it's whether or not we'll get to see a Nick and Jess wedding before the show is done. I definitely have my fingers crossed. A True American-themed Bachelorette party? I need to see that.