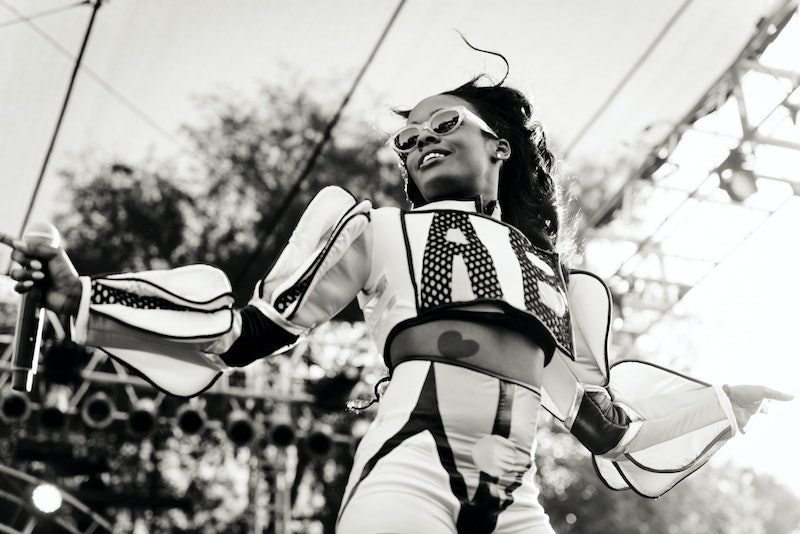 Azealia Banks is trying to make amends with T.I... in her way, you know? The scrappy rapper is more notorious for her Twitter feuds than for her records, which is a shame, because she really is talented. After reigniting a 2012 feud with T.I. last week (in which Banks claimed his wife had "meth face" and "couldn't read"), on Monday, Banks tweeted that her feud with T.I. was over because it just wasn't "interesting anymore." Not exactly an apology, but for Banks, who has confronted via Twitter almost everyone you can think of (Lady Gaga, Iggy Azalea, and Pharrell, just to name a very select few), it's definitely a start.

Apparently, Banks saw the error of her petty ways after she took a renewing retreat ito the woods — maybe she was taking cues from The Fault in Our Stars star Shailene Woodley, who's, like, 80 percent wood nymph. Or maybe she was taking hints for Alexander Supertramp. Regardless of her inspiration, Banks tweeted that she spent some time in Mother Nature and it was evidently MUCH more interesting than silly Twitter feuds (although if she was genuine, I think she would restrain from advertising her newfound serenity on Twitter, but that's just me).

I'm not really buying that Banks has seen the forest through the trees; she may feel reconciliatory today with T.I., but judging from her past behavior, it won't be long before she's starting shit with someone else. Usually the feuds come and go, ebbing and flowing like the Twitter tide; I just don't know what compels Banks to unleash her ire on social media. I guess all press is good press, right?

She followed up the tweets with a few that tried to "make good" with other stars: "I love Lana" and "I love ke$ha." Okay, all that is fine and good, but they could just as easily be victims of her next Twitter rant. No one is safe from Banks!

Even though she retreated to the quiet countryside to reflect and reassess, it seems thinly veiled and really, only time will tell if she's actually doing an about-face and changing her inflammatory ways.