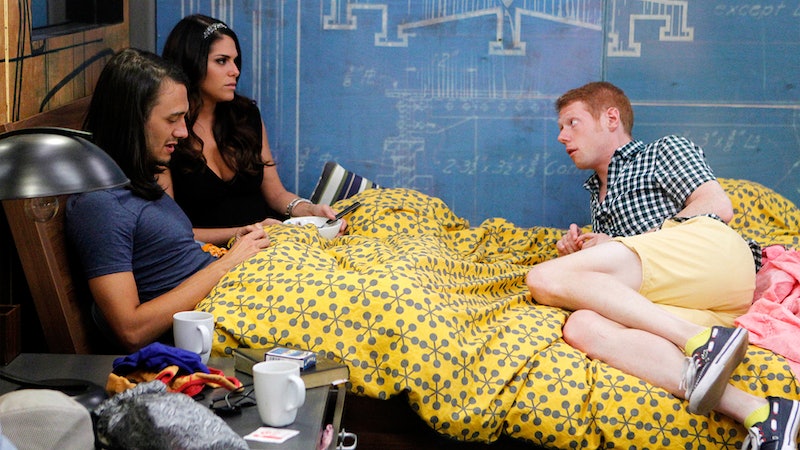 As colleague Aly Semigran already meditated on with far more eloquence and focus than I could ever summon, Big Brother has been, like, pretty boring these past few weeks. Not to say we MISS any of our departed racists or general societal maladjusts -- hardly! -- but without the faux-Cherokee war chants of Jeremy or even the "yeah, you tell 'em!"s emanating from his girlfriend, Kaitlin, there's just an unconscionable lack of excitement in the house right now. Maybe it will pick up soon? I'm no educated veteran of the series, so all that's fueling me is optimism. People keep saying Zingbot will perk things up…

In any case we're still left to discuss the show NOW, boring or not. So what do you guys want to talk about? The fact that so many weeks in, Jessie remains a non-character we've heard less than a full sentence from? Amanda and McCrae's ongoing and presumably deepening showmance, now featuring the word "babe"?

Like you, I'm at least kind of captivated by the psychological games producers have opened up with the MVP twist. For the first three weeks the audience voted on who would win the honor, and for the first three weeks Elissa -- on the strength of her blood relation to popular winner Rachel Reilly -- consistently nabbed it. Realizing this would only continue, producers changed things up…and now we take up that MVP vote. The houseguests weren't told. They still think (or most assume, anyway) that the MVP still resides among them.

Hence a conversation like the one Amanda had with Howard, accusing him of having MVP power. The circular logic of it all was just too much. "Do you have it?" "MVP?" "If you have it you should tell me." "I'm telling you I don't have it." "But that's exactly the kind of thing you would say if you did." "If I did have it, do you think I would tell you?" "I just don't think you're a straight shooter." "I don't have it." Again, this is dramatic television.

The rogue MVP vote effectively throws everyone's motives and gameplay into suspicion, driving old alliances deeper into the ground (hi, Moving Company!) and making someone like Candice so scared she tries to intimidate Helen into changing her upcoming vote from Howard. No one knows who's in the power seat.

Okay -- let's use that agitation to move this game along, evict some floaters and really see what houseguests are prepared to do to win it all. Any good story requires stakes; this tale of 15 strangers living in a house is no different. Make us care again, Big Brother!