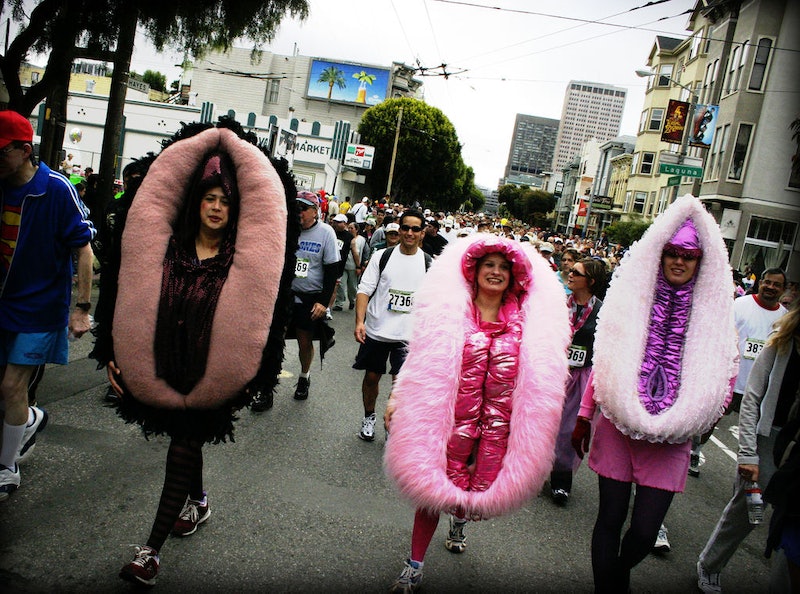 Here's your daily dose of Americans abroad reinforcing all kinds of negative stereotypes about our intellectual capabilities: a foreign exchange student "studying" in Germany recently had to be extricated from a giant sculpture of a vagina. Yes, you did read that right. The student was allegedly dared to climb into a statue that lay outside the department of microbiology and virology at Tubingen University. Oddstuff reports that he "labored" to free himself from the marble vagina (yes, they did actually say labored) but was, alas, stuck.

According to a German newspaper, Schwäbisches Tagblatt, emergency responders got a call mid-afternoon last Friday that someone was "stuck in a stone vulva." To help, uh, deliver him from his predicament, 22 firemen and 5 firetrucks were sent to the unnamed student's rescue. Luckily, the man was unharmed, as was the statue, a piece of art by the Peruvian artist Fernando de la Jara. Its name is "Chacan," which means "making love" in a Peruvian Indian language. I am going to go out on a limb here and say that de la Jara probably didn't intend for his sculpture to be used as a hidey-hole.

Also, this incident raises so many questions. Like, where are our vagina statues? Hello? Virginia and DC, are you listening? I can't imagine my stomping grounds have any out on display anywhere other than an art gallery. We do have a ton of enormous phalluses, though.

Can you even imagine the uproar if an American public school put a vagina sculpture on display? Also, has nobody ever tried to climb into this statue before? An American cannot have been the first one to do it. Anyway, kid learned his lesson. But, as one commenter on Oddstuff wrote,

"Firemen? How silly. They should have called the midwives."

Totally unrelated to this man getting stuck, but how come this statue doesn't have any outer labia...? (I was in a production of The Vagina Monologues, guys, I can't help but think about these things.)

If that is not enough vulva-related news for you, may I also interest you in marijuana lube or a reel of all the vagina references in Orange is the New Black?