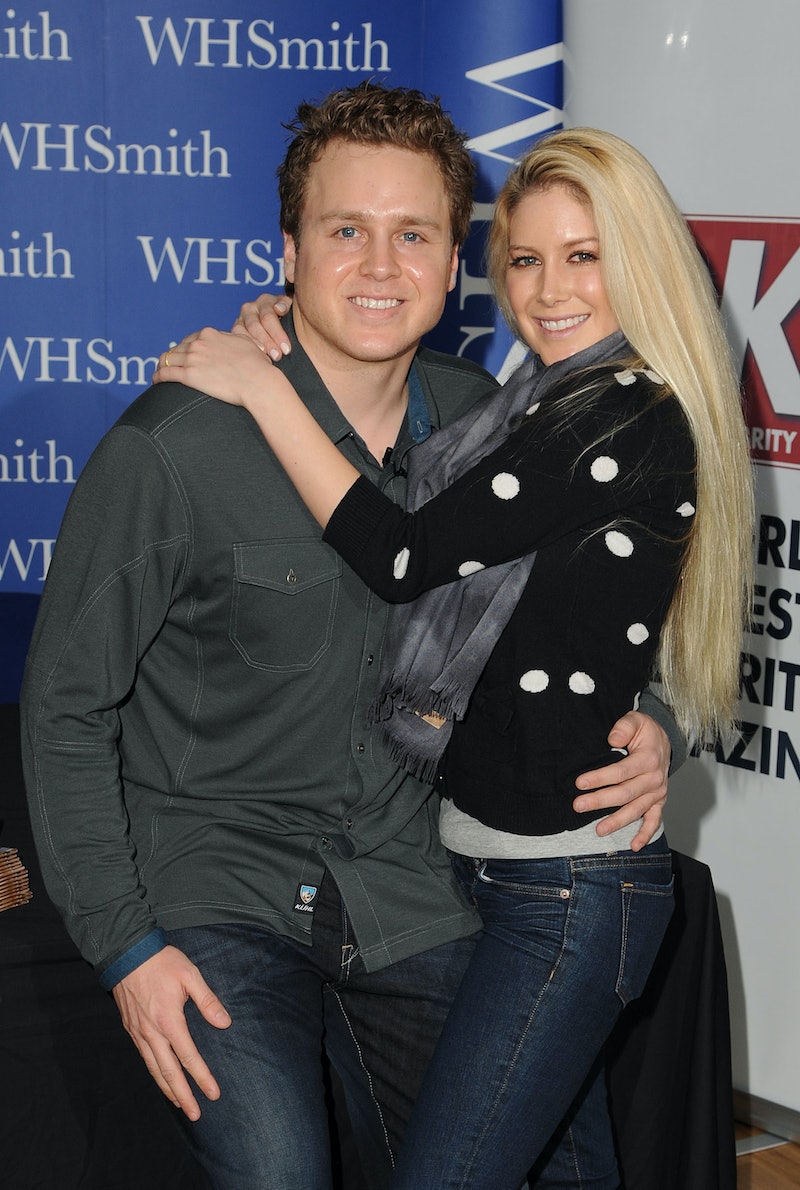 If you were a teenager when The Hills was in its heyday, you know exactly how to answer this question: Are you a Lauren, or are you a Heidi? In one of TV's biggest BFF feuds of all time, girls (and guys) everywhere were required to pick a side and thanks to how quickly her boyfriend — now husband — Spencer Pratt became easy to hate, most people weren't picking Heidi Montag's. But no matter whose side you took, even the Laurens couldn't ignore the facts: Heidi and Spencer were reality TV gold, and as much as you wanted to hate them, you couldn't help but watch everything they did. However the key word is were, because more recently, the couple hasn't been quite as lucrative, leaving fans to wonder if Spencer and Heidi have gone broke since their days on The Hills.

Let's fast forward straight to 2014. Aside from their recent appearance on Celebrity Big Brother in 2013 and an E! special earlier this year, Heidi and Spencer have been flying under the radar... until Tuesday night, when we get to see them switch lives with another couple on Celebrity Wife Swap. You'd think they'd be living a pretty cushy life right about now, retired in their late 20s and primed with crazy MTV reality stories to tell their eventual grandchildren, but that's not exactly the case. Instead, Heidi and Spencer have reportedly squandered the $10 million they made from playing bad guys on The Hills, and according to CelebrityNetWorth.com, they're each worth a cool $1,000. Yikes!

But what happened to all that money? In 2013, Spencer said that at their height of their fame, he and Heidi thought they were "Jay-Z and Beyonce," and that every time Heidi went shopping, she'd spend about $20,000 to $30,000 — at that rate, yeah, $10 million can disappear pretty quickly. It kind of makes me sick to imagine that much money being spent in a single shopping trip when you consider that Heidi laying off just one shopping day would pay off most of what's left of my student loans.

Here's the thing: By Heidi's own admission, right now they're not broke — they're just not enjoying the kind of crazy wealth they used to. "We're are definitely more money conscious now," Heidi said in their E! special, Aftershock. "We are not really rich, but we're certainly not poor."

But don't think they don't regret blowing through their money so quickly. They admit that the money was easy to spend when they were young and the money just kept coming in, and that's true. Most people in their early twenties would have no idea how to handle that kind of money, and if you think your reality career is going to last forever, why not spend it? Maybe not on $4,000 of wine, but their mistakes are in the past now.

"I regret spending a lot of money, for sure," Heidi told Fox News. "I wish that I had been more responsible.

Today, Heidi says they're very on top of their cash situation to make sure they don't have those kind of regrets in the future:

So now, no matter what success comes in the future, I’m very on top of it. I look at our bank accounts every day. Like, I just had to tell Spencer to stop buying TV shows on iTunes! I was like, ‘OK, maybe it looks like $2 here and $2 there, but that adds up to $10! And then that adds up $100!’ You may think it’s a little money here and there, but everything adds up and I’ve really learned that.

Good to hear it! Hopefully, if Spencer and Heidi do make a comeback, they know better than to spend $500,000 on crystals this time around. No, seriously. That really happened.

More like this
Kourtney Kardashian Broke Her Engagement Ring & Cried In Her Closet For Hours
By Jake Viswanath
Scott Disick’s First Time Around Kravis Was “Awkward,” To Say The Least
By Jake Viswanath
Kim Kardashian Joked That Her Wedding To Kris Humphries Was A “Gay Wedding”
By Jake Viswanath
Two 'Temptation Island' Singles Dropped A Bombshell About Lascelles At The Reunion
By Brad Witter
Get Even More From Bustle — Sign Up For The Newsletter