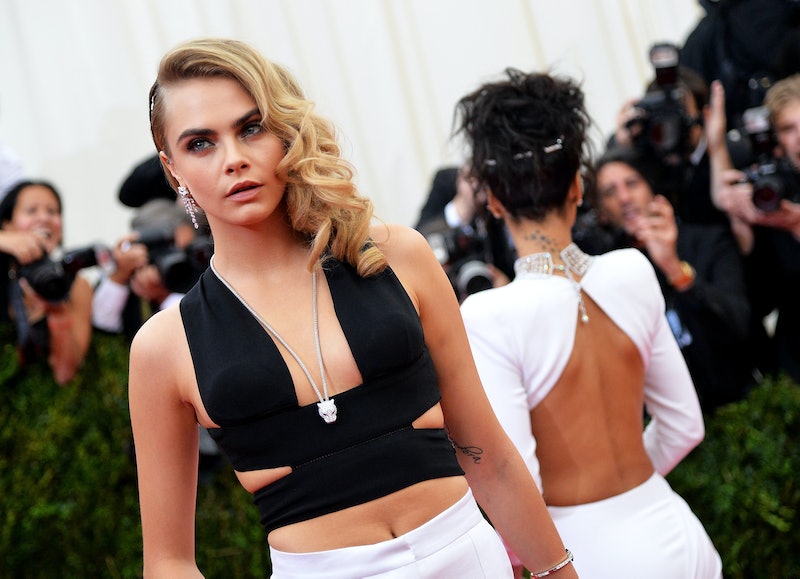 Everybody's favorite model turned It-girl (turned actress) Cara Delevingne reportedly fell asleep not once but twice during a Vogue interview with Plum Sykes. Be it from extreme boredom, exhaustion, or narcolepsy, I must ask: Cara Delevingne, are you okay?

Delevingne, who I suppose is cool in a Kate Moss-lite kind of way, proved a bit unreliable (and extremely tired) when she overslept for her initial meeting with Sykes after allegedly partying with Lily Allen the night before and then passed out again during a mid-interview massage session. "Dear reader," Sykes writes, "to misquote Oscar Wilde, can I say that to oversleep once for a Vogue interview may be regarded as a misfortune, but to oversleep twice looks like carelessness?"

Later, photographer Tim Walker tells Sykes "Every shoot I've done with her, she's fallen asleep. She slept for seven hours on one Mulberry shoot." Hm, well that's concerning. As someone who has fallen asleep in the middle of several crowded parties, almost nightly while watching television with my boyfriend, and during both of The Hobbit movies (in IMAX 3D), I understand the ability sleep to through just about anything. But a Vogue interview? Not a chance.

Perhaps, though, we should be cutting Delevingne some slack. Just one look at her Instagram account and you can see how busy she is. Here are all the reasons Cara Delevingne can't be bothered to sleep during normal nighttime hours like the rest of us. (But, okay, no. You're not excused for sleeping during the interview, girl.)

2. It takes her a minimum of twelve hours to put on jewelry

That's a whole lot of bling to wade through.

3. She's still washing this paint off her skin

"NO ONE TOLD ME THIS WAS ACRYLIC!"

4. Her bunny demands attention at all hours of the night

How can you close your eyes on something that cute?

5. Oh, and did I mention the parties?

6. Because there are lots and lots of parties

Drinking with other beautiful people is worth skimping on shut-eye.

More like this
10 Talc-Free Makeup Brands For Safer Eyeshadows, Powders, & More
By Audrey Noble
10 Swoon-Worthy Beauty Looks From The 2022 Cannes Red Carpet
By Olivia Rose Ferreiro
10 Ways To Modernize The Early '00s Frosted Eyeshadow Look
By Olivia Rose Ferreiro
Millie Bobby Brown's Blonde Hair Is Very Britney Spears Circa 2002
By Paris Giles
Get Even More From Bustle — Sign Up For The Newsletter