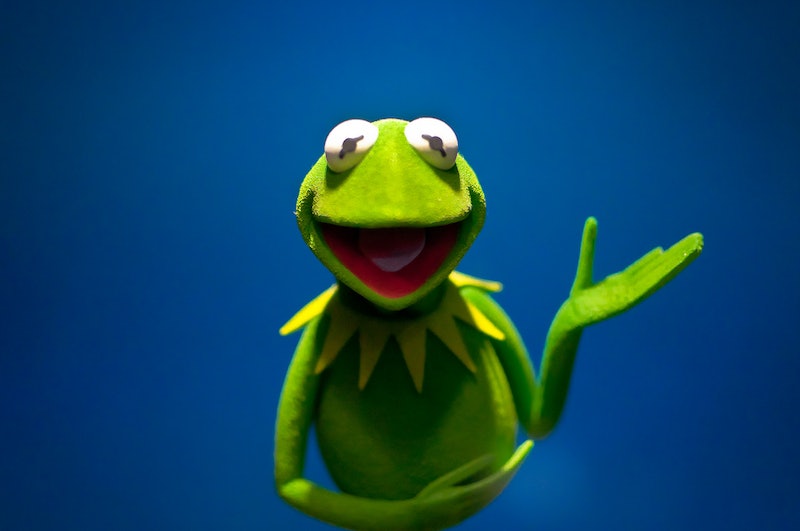 Unless you've been living under a rock, you probably know that Kermit the Frog has made a totally unexpected reappearance on the Internet in the sexist and racist #ThatsNoneOfMyBusinessTho meme. These tweets and pictures feature Kermit sipping tea and making crass comments, and the Instagram account has over 136,000 followers as of today. Although some people appear to be amused by that kind of thing, we're of the opinion that Kermit doesn't need those kinds of quotes attributed to him. In fact, he's said more than a few spot-on gems himself. Here are 10 of the wisest, funniest, and strangest quotes from our favorite frog.

1. The Time When Kermit Showed Off His Art History Chops

Gonzo: Hey, Kermit, are you busy?

Kermit: Yes, Gonzo, but I can give you my ear for a minute.

Gonzo: What would I do with your ear?

2. The Time When Kermit Knew His Audience

Quentin Tarantino: And then they pull out SAMURAI SWORDS! They slash and cut and there's explosions everywhere!

Kermit: This is a muppet movie.

(The Muppet's Wizard of Oz)

3. The Time When Kermit Doled Out Sage Advice

Kermit: Here’s some simple advice: always be yourself. Never take yourself too seriously. And beware of advice from experts, pigs, and members of Parliament.

(It's Not Easy Being Green)

4. The Time When Kermit Sounded Like A Romantic Poet

Kermit: Why are there so many songs about rainbows

And what's on the other side?

Rainbows are visions, but only illusions,

And rainbows have nothing to hide.

So we've been told and some choose to believe it

I know they're wrong, wait and see.

The lovers, the dreamers and me.

5. The Time When Kermit Knew His Star Wars Facts

Fozzie: Oh, I know who I can play! [grabs two belts] I could play Whewbacca the Cookie!

Fozzie: That's what I said, Cuchacca the Bookie.

6. The Time When Kermit Nailed The Three Greatest Gifts

Walter: But Kermit, you have to try! The Muppets are AMAZING! You give people the greatest gift that can ever be given!

Walter: No, the OTHER gift.

7. The Time When Kermit Was Brave Enough To Tell The Truth

Kermit the Frog: Why don't you try something like: Ocean Breeze Soap will get you clean.

Jill the Frog: You mean just say what the product does?

Gil the Frog: No one's ever tried that before.

8. The Time When Kermit Confirmed The Obvious

Kermit: If life were easy, it wouldn't be difficult.

9. The Time When Kermit Understood Your Problems

Kermit: When you decide what your Big Dream is, you’ll be bursting with enthusiasm and want to share it with everybody. Most everybody will give you one of those ‘OK, that’s nice, now please pass the ketchup’ looks. Some will scoff, suggesting that whatever your Big Dream is, it’s too big for you. And a select few will whisper words of encouragement. My advice is this: Pass the ketchup. Ignore the scoffers. And remember those words of encouragement ‘cause they’re the only ones that matter.

10. The Time When Kermit Showed Us How To Be Suave (As A Robot)

Robot Kermit: Hey, listen you, how about you and me getting together and makin' some ste-e-e-am heat. Huh, snuggle bunny?

Robot Kermit: Yeah. Look, let me take you away from all this. Aaah, a marriage made in heaven. A frog and a pig. We can have bouncing baby figs.

If you need more Muppets love to perk up your day, take a look at a music video from the recent Muppets Most Wanted film.