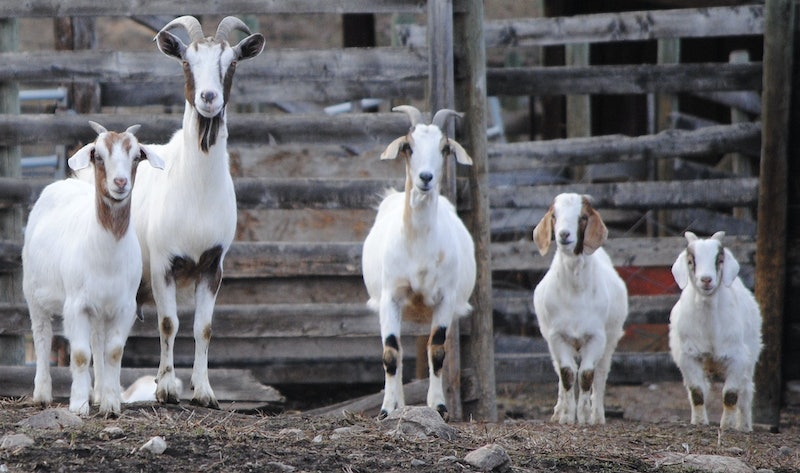 In East Asia, cafes with goats, cats, sheep, rabbits, and plenty of other animals are becoming increasingly common. Although animal cafes are just now hitting the West with establishments like Le Cafe des Chats in Paris and the NYC pop up version, the trend (kicked off by a cat/coffee combo) has been around for ages in Japan, Taiwan, and South Korea. About twelve years ago, Cat Flower Garden opened in Taiwan. They're now commonplace; for example, Tokyo now has over 100 cat cafes. KitTea, the first permanent American establishment of its type, is scheduled to open later this year.

Cats and coffee. All right. That's a pretty natural pair. After all, the typical image of a writer's kitchen includes a tea kettle whistling away on the stove and a pensive feline nestled on the windowsill. But everyone's favorite caffeinated beverage has been getting matched up with all kinds of animals lately, and goats are the latest coffee break accessory. Sakuragaoka Cafe in Tokyo has been attracting crows of visitors ever since its owner, Rena Kawaguchi, started taking goats Sakura and Chocolat on walks through the city's Shibuya district.

However, goats pose a far bigger challenge than cats: they have to be kept in a pen, and that pen has to be mucked. But goats are also some of the cutest creatures on this earth, so I understand the allure of such an establishment completely. If you're not convinced, please see below.

And all hell could break loose when goats start doing parkour.

The Falconer Cafe, also in Tokyo, allows coffeephiles to sip their lattes next to owls, hawks, and other birds of prey. Meanwhile, the Subtropical Teahouse across the city features turtles and lizards. In Seoul, Thanks Nature Cafe has several "friendly and approachable" sheep you can feed. These all sound like an utter dream come true to me. As someone who has been known to lose all semblance of maturity around animals of any kind, I would visit any of these in a heartbeat (despite the inevitable smells). Heck, the coffee would just be a bonus.

I will be patiently waiting for my hometown of Richmond, VA to open its own animal cafes. Preferably with bounding llamas.

Or dragons (which are definitely not compatible with goats).

More like this
13 Summer Solstice Quotes To Celebrate The Longest Day Of The Year
By Sadie Trombetta
On TikTok, Orange Wine Is The Varietal Of The Summer
By Madeleine Aggeler
Is The Insta-Famous Always Pan Actually Worth It?
By Jessica Goodman
Taco Bell Announced A Crunchwrap & Tostada Made With Cheez-Its
By Emma Garza
Get Even More From Bustle — Sign Up For The Newsletter