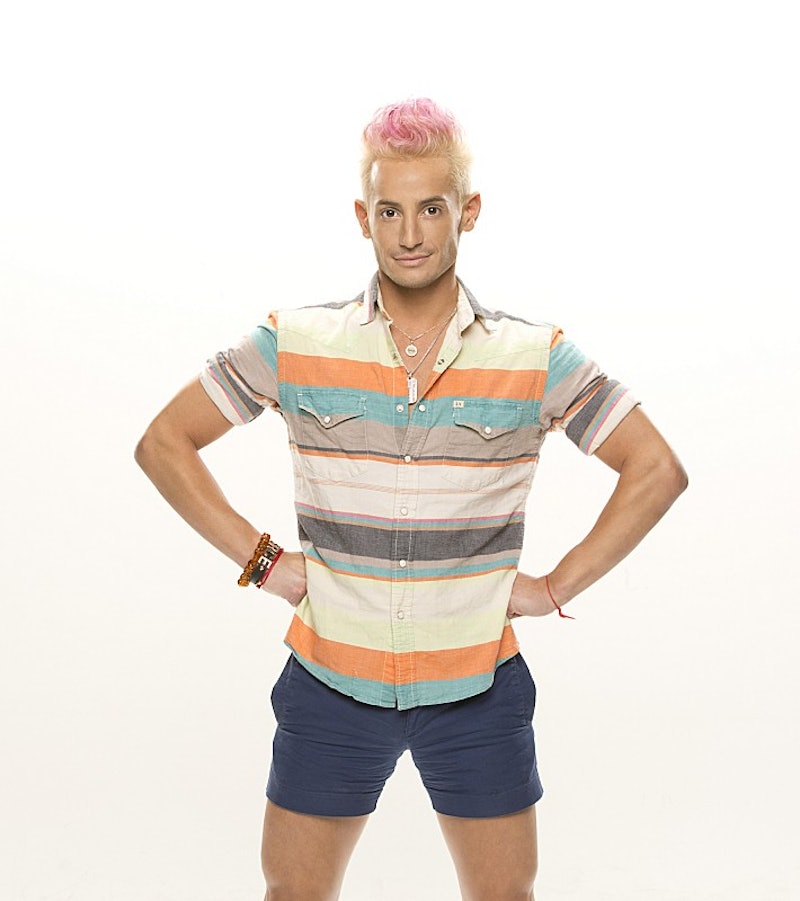 In case you missed it, Big Brother houseguest Frankie Grande is the brother of pop star/actress Ariana Grande. Did you catch that? Did he mention that little tidbit of information roughly 73 times during the Season 16 premiere of Big Brother on Wednesday night? Why yes! Yes, he did!

The spunky 31-year-old self-proclaimed "Queen of YouTube" (he not-so-humble-bragged that he has 1.2 million followers) and Broadway baby not only mentioned repeatedly that he's the sibling of the "Problem" singer, but he even gave her a call when he found out he'd be heading off to the Big Brother house.

Now, Frankie is thrilled to boast that Ariana is his sister... but just never mention it. The houseguest doesn't want to put an "unnecessary target" on his pink head on Big Brother. While he doesn't have the issue of an instantly recognizable resemblance like Elissa Slater did in Season 15 because she looked exactly like her sister, Big Brother all-star Rachel Reilly. (For crying out loud, Frankie even referred to himself as Rachel. Stop showing all your cards, man!)

So while its unlikely Frankie will be figured out from his looks, we're guessing he won't be able to keep from blurting out the information about his famous family member. Heck, he even made his victory cry when he won the first HoH of the summer, "Go Grande or go home!" Nope, that definitely won't put a target on your back with the Crazy 8s. That alliance name has to go by the way, houseguests.

Just try and play it even marginally cooler, Frankie. That said, when he eventually does crack, maybe he'll explain, once and for all, what in the actual hell Ariana's voice is on Sam & Cat.