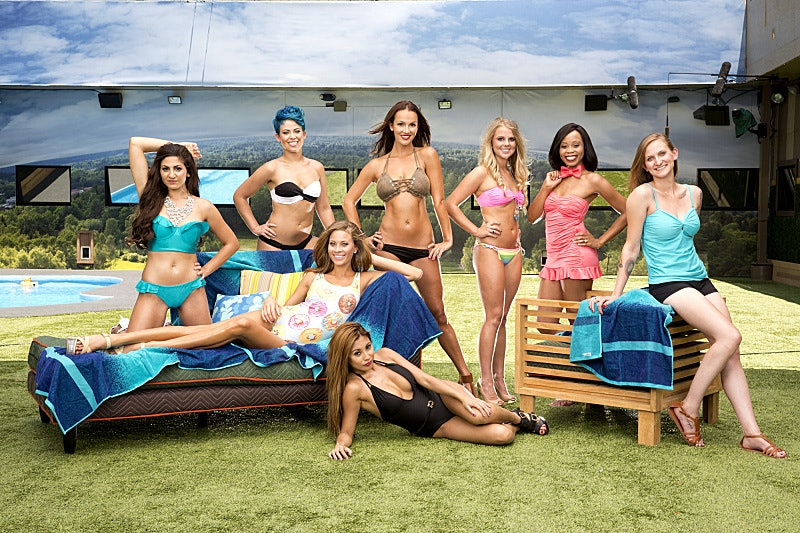 Even if you're one of those contestants that says, "I'm not here to make friends; I'm here to win" (Seriously, does anyone say this in any other context than on a reality show?), you still need to play a strong social game in the Big Brother 16 house. And that usually means cozying up to strangers to form an alliance early on in the game. There's only been one episode so far, and already we've seen something uncommon: an alliance composed of only women.

The first eight houseguests that moved into the Big Brother house during Wednesday night's premiere seemed especially eager to make some promises. Unsurprisingly, the original octet agreed to look out for one another as "The Crazy Eights" and take out members of the next group of eight to enter the house. And then of course, the Crazy Eights started to form their own mini-alliances within that. Donny and Devin paired up because no one would ever suspect they are working together, according to Devin. However, Donny also expressed interest in working with his fellow nature-lover Nicole. But perhaps the most interesting alliance to come out of the premiere was "El Cuatro," comprised of the four females in the house so far, Nicole, Amber, Joey, and Paola.

In forming the alliance, many of the women were inspired by the lack of female winners in Big Brother history. Out of the 15 winners of the show so far, only five of them have been women. The last woman to win was Season 13's Rachel Reilly in 2011. Clearly, it's time for another lady to rule this house.

But a lot can happen between now and September. Things change, people change, and as we all know, there can only be one winner at the end of the summer, so there's bound to be some reshuffling here and there when your survival is on the line. What are the chances that this fab four will make it to the end and actually crown one of its members winner? If looking back at past Big Brother alliances is any indication, the odds are not good.

From the official alliances formed in past Big Brother seasons (and from official, I mean ones that have those very creative names attached to them), the female players have not come together that often, for whatever reason. The vast majority of alliances have either been male-only or co-ed. We just haven't really seen all-girl alliances be successful because there simply haven't been that many. We did have Helen and Elissa's "Mom Squad" from last season, but the pair was such a huge target, mostly due to Elissa's famous sister Rachel, that they really didn't stand a chance.

However, Season 4's "Girl Power," which included Alison, Erika, and Jun, aligned at the right time to give them the upper hand in the house, with three votes compared to Robert's and Jee's two. In a combination of loyalty and winning many competitions, the ladies made it to the final four, and eventually Jun came out on top. "Girl Power" is the all-female alliance all the Big Brother sisters should aspire to.

When women on Big Brother don't band together, you bet your bottom dollar that the men will, and not recognizing this has been disastrous for some players. For example, in Season 12, Britney thought she was a part of "The Brigade" with Enzo, Hayden, Lane, and Matt, which formed extremely early on. She was devastated to find out what we all knew at home, that it was a boys' club from the beginning, and they never intended to take her to the finals. "El Cuatro" has so far avoided this trap, so that's a good sign for survival at least.

It really is too early to tell how "El Cuatro" will fare this season, but one thing they need to be concerned about immediately is the possibility of their members getting involved in "showmances." It's only a matter of time before Paola and Cody hook up this season. There was also a spark between Devin and Joey, and Amber was eyeing Devin as well. "Showmances" aren't always as bad as they sound on Big Brother, but sometimes they end in a female player's demise. In Season 7, Mike "Boogie" basically used his relationship with Erika to become the eventual winner, while she ended up in second place. Overall, "showmances" just bring unnecessary attention to you and your partner, and nobody in the Big Brother house needs help going home any earlier, especially if that means a female player going home before some man, which is usually the case.

It'll be interesting to see what happens when the other four female contestants arrive at the house. Will they be accepted into "El Cuatro" and become "El Ocho"? That probably wouldn't work out so well because having alliances larger than four or five gets too messy, and there's kind of no point in having a team too big to take to the end. There's a whole lot of people and situations that they're going to have to factor in between now and the end of the summer. As long as they stay focused, win a lot of competitions, and keep in mind that goal of having a woman win this season, there's no doubt in my mind that "El Cuatro" can make it far in this game.