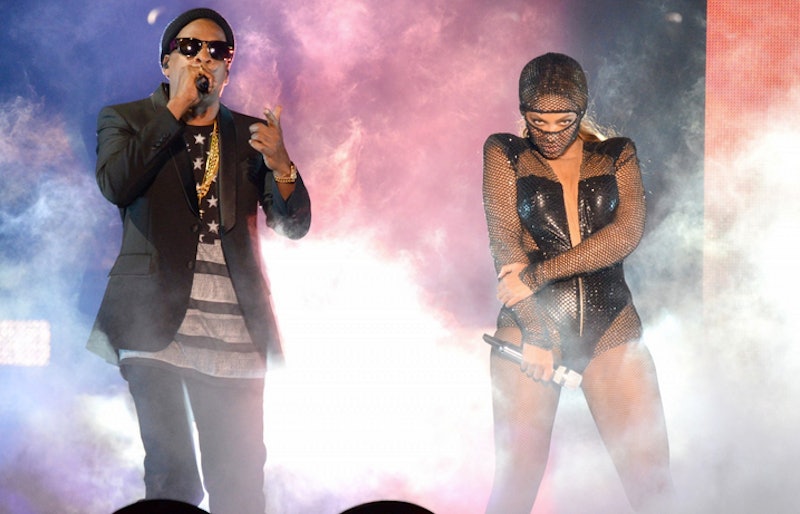 If Beyoncé and Jay Z's wedding was ignored compared to Prince William and Kate Middleton's wedding or Kim Kardashian and Kanye West's wedding, it's because the two quietly got married in what was reportedly a private ceremony in Jay Z's New York apartment back in 2008. Unlike the Royal Wedding, which was televised, and the Kimye wedding, which was photographed, the notoriously private Jay Z and Beyoncé didn't feel the need to share the intimate details of their wedding with the rest of the world. At least, not until now. We all knew that Jay Z and Beyoncé's On the Run Tour was going to be the most epic show of the summer, but I don't think any of us expected this kind of epic. During their opening night in Miami, Jay Z and Beyoncé showed never-before-seen wedding footage during one of their songs and we already wish that we'd been there.

The footage was shown on a large screen during a mash-up of Beyoncé's "Halo" and Jay Z's "Forever Young". It took the audience a moment to realize what they were staring at, but by the time the short clip show flashed to Beyoncé in her veil staring lovingly at Jay Z in his suit, everyone was screaming. We've seen Beyoncé in her wedding dress before, when her music video for her 2011 song "I Was Here" featured her trying it on, but this is the first the world has ever seen of the wedding itself. The clips that Beyoncé and Jay Z exclusively debuted to the audience were:

Getting Their IV Tattoos

Jay Z Puttin' a Ring On It

Their First Walk as Newlyweds

Fingers crossed that a high-quality and official release of this video, and more wedding home movies, is in our future. If you didn't already believe that Beyoncé and Jay Z made the perfect couple, then this 15 second clip show might just be what pushes you over the edge. Every time Beyoncé and Jay Z choose to share their private life with the public, they always do it in a sweet and tasteful way. The clips they chose to encompass their wedding and their relationship were on point, especially when you combine it with the fabulous concert they were already putting on.

The rest of their tour dates are going to have a lot to live up to after this one. Watch the clip show for yourself below.