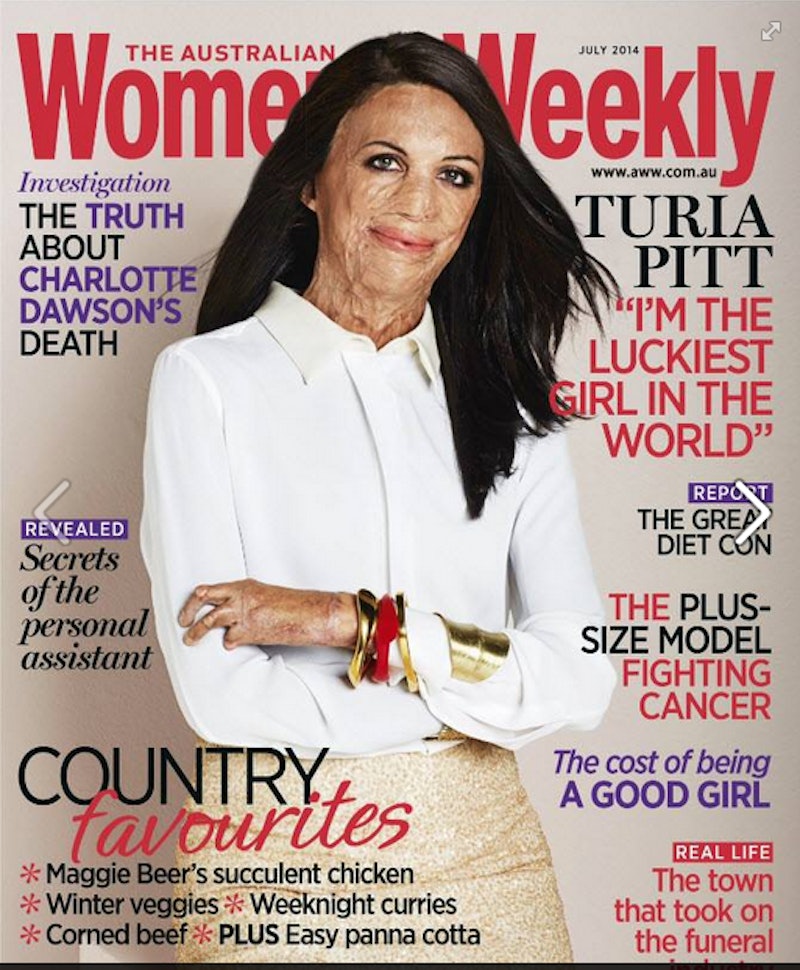 When you're standing in the grocery store check out line, there's a certain type of face you expect to be staring back at you from the magazines on the rack. But The Australian Women's Weekly , a glossy women's mag from the Land Down Under, is mixing things up this month in a big way by featuring Turia Pitt, a marathoner and burn survivor, on their cover. And as challenges to the status quo go, this one is pretty awesome.

Pitt, age 26, suffered extensive burns while running a marathon in 2011 after a brush fire swept through the 100k marathon course in Kimberly, Australia. Several people were injured, and Pitt was left with burns covering over 60 percent of her body. She underwent over 100 surgeries, and later settled a case against the race organizers who were found to have not taken proper safety precautions. Today, Pitt is a published author who's still doing marathons and who works with ReSurge International, an organization that helps provide reconstructive surgeries, like the ones Pitt underwent, for people in the developing world.

Having someone like Turia Pitt on the cover of a major women's magazine is a huge deal. Obviously, her inspiring story makes her completely worthy of being honored, but even more than that, the fact that she does not conform to traditional ideas of beauty makes putting her on the cover a bold move for The Australian's Women's Weekly.

Although women's magazines often do support serious women's issues – Cosmo, for instance, has been getting serious about reproductive rights lately – but they still tend to promote beauty more than issues, at least on their covers. Over the past year, we've seen women's magazines try to down play Mellissa McCarthy's size, treat Mindy Kaling differently than her white counterparts, and refuse to run a bikini photo of a woman in their weight loss series becuase it didn't meet their idea of a success story.

Given all of that, it's incredibly wonderful to see a women's magazine highlighting a woman who's strong and compassionate and inspiring – and who doesn't meet with traditional beauty standards. No one is saying that gorgeous and successful actresses and models don't deserve magazine covers, but by putting someone who looks like Pitt on their cover, The Australian Women's Weekly is sending the message that what you accomplish should be what qualifies a person for recognition, no matter what they look like, and that not fitting with people's idea of what's attractive doesn't mean a person isn't beautiful.

And it seems that people everywhere agree.

Here's hoping we get even more cover girls like this, and that Turia Pitt continues to be recognized for her awesomeness.