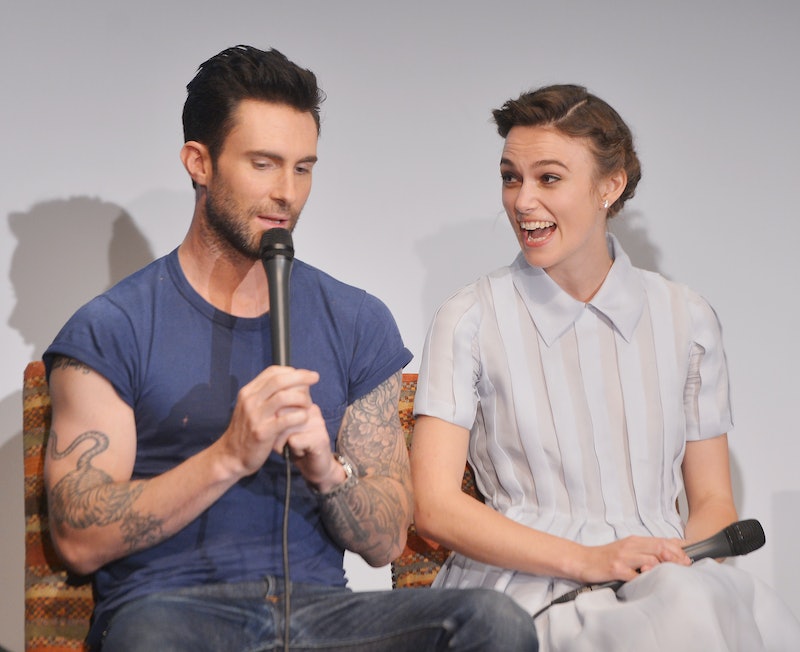 Adam Levine may be most widely known as the lead singer of Maroon 5, but he's working as hard as he can to become a multi-hyphenate. In the past few years he's become an entrepreneur with fragrance and menswear lines, a producer with his own record label, 222 Records, a judge on NBC's The Voice, and a television actor, thanks to a role on American Horror Story: Asylum. And now he has one more job to add to his ever-growing list: movie star. In a role that parallels his own real-world successes, Levine stars in John Carney's new film Begin Again as a musician named Dave who hits it big. At a press conference for Begin Again, Levine discussed his role in the film, speculated on the future of his movie career, and even shared his thoughts on "selling out."

Carney, who directed the film and is the man behind the 2006 Oscar-winner Once, says he approached the Maroon 5 frontman specifically because of the parallels between the actor and the character. He was so confident in his choice that he cast Levine despite the singer's complete lack of acting experience. Levine actually filmed Begin Again before his stint on AHS, so he was truly a newcomer.

While the rest of the cast took singing lessons to prepare for their vocally-demanding roles, you might think Levine would have been busy with an acting coach. Not so, he says.

I tried to take [a class] and it didn't go well. It was bizarre, I didn't like it, it wasn't making me happy. So I just thought I would pretend I knew what I was doing and hope and pray that it would work, because these people are all very, very talented. I wanted to treat this [character] like a totally different person, even though that's impossible. Because I literally don't know how to act, I was like — some of me is coming out here. It's impossible for that not to happen.

Levine is able to list quite a few similarities between himself and the character.

This character is in the midst of becoming successful. When it happened to me, I was probably tempted by some of the same things he was. And granted, my story is very different than his, but it was very easy to tap into what it was like to experience all these things that we never expected to experience. When you commit to being a musician, I don't think you're sure that you're ever going to be able to pay the bills. I don't think you care about that as much as you care about playing music. So this guy is just overwhelmed. And so was I. So it was easy, actually.

When asked if he would consider acting in another film, Levine hesitates — but not for the reason you might think.

I have no idea. All I know is that it was really fun. It was a dream experience, and this sounds really kiss-ass-y, but I love these guys, all of them. They’re so nice. And it was just one of those things, I don’t think it can get better than this. So I might not ever make another movie, actually. Because there’s no way it could surpass how much fun I had with this. It was a blast.

The most intriguing question came when someone raised the issue of "selling out," which is an important theme in the film. Levine seems eager to jump on the issue, and it's no wonder: Maroon 5 itself has been accused of selling out, as some fans have watched in dismay as the alternative indie band they used to love has become (some say) much more commercial. It's hard not to draw parallels to Levine's music career in his response, which is ostensibly in regards to Begin Again.

In music, people spend a lot of time figuring out who they are and presenting that to the world in a very calculated way. And I think in order to understand what selling out is, you first have to define what it means. Doing something that you love, regardless of whether it’s a blockbuster movie or writing a pop song, trying shamelessly to succeed at something isn’t selling out. I think that’s actually fine, and I would encourage that all the time. Selling out really comes when you sacrifice your own personal credibility in order to have success on a larger scale. That’s selling out.

So is Adam Levine just trying shamelessly to succeed? Or is he sacrificing his personal credibility? That's up to you to decide, but it's clear from his answer how the singer feels about his own band's evolution. It's also clear that even if Dave is the last character Levine ever plays, he'll be happy with his movie career.