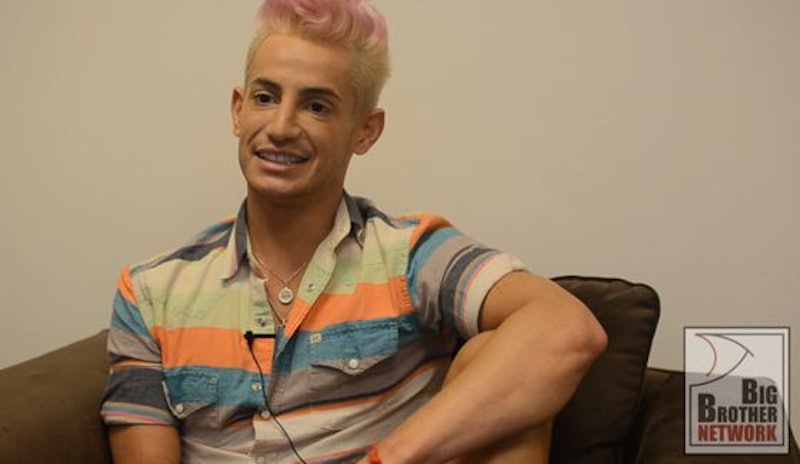 Love him or hate him, the star of Big Brother 16 is undoubtedly Frankie Grande. The Internet collectively flipped out when it was announced that the YouTube personality and half-brother of Ariana Grande would be a houseguest this season. Since the season premiere last night, complete with an audio appearance by Ariana Grande, the buzz has not died down at all. This season should basically be called Big Brother Grande. But if you're not much of an Arianator or Frankie fan and don't really care who this guy is, you should. His famous connections could actually have a huge impact on the game.

Remember during Wednesday night's episode when Julie Chen introduced the new "Team America" feature to this year's competition? In case you were too mesmerized by her flowing red maxi dress to be conscious, here's a quick reminder. Big Brother 's "Team America Vote" is going to make the game more interactive this year than the lame "America's Vote" of years past, where you could just choose what the Have-Nots ate. The new "Team America Vote" chooses three houseguests to put in a secret alliance. Throughout the summer, America will vote to make the alliance perform secret tasks. There's no telling what any of these missions will be, but I personally hope one of them is to shave off Donny's beard. Don't you think he would look so much better without it?

If you didn't vote to choose the members of the secret alliance yet, you're out of luck. Voting has closed, and the first member of the alliance will be revealed during the second premiere episode on Thursday night. And I think it's painfully obvious who's going to get the most votes in this election: Frankie.

When you're told to vote for one of 16 strangers, you're of course going to pick whoever seems the most familiar to you or is the most appealing in some other way. Frankie has the Ariana Grande seal of approval, which will not only win him votes on his own, but has also gotten him tons of publicity leading up to the premiere. Even if you don't know who Ariana Grande is, you've probably seen Frankie's face by now. Plus, Ariana has an extremely passionate fan base. They're not called Arianators for nothing. If the singer simply sends out a tweet encouraging her fans to support Frankie, many of them are going to follow her wishes.

Not to mention that Frankie is somewhat of a celebrity in his own right. His funny, musical YouTube videos have earned him a following of more than 193,000 subscribers. YouTube-lebrities have rabid followings, and it's very likely that Frankie's presence on the video platform has helped him immensely in the "Team America Vote" as well.

If you think it's a bit premature to cry foul on this whole twist, then just think back to what happened last year. BB15 introduced the " Big Brother MVP" twist where America would vote for the "Most Valuable Player" to nominate a third houseguest every week. For the first three weeks, Elissa, the sister of the much maligned and also weirdly celebrated Season 13 winner Rachel Reilly, was chosen as MVP. Now I'm going to go out on a limb here and guess that Elissa got those votes because she is Rachel's sister. Not only did this put the other houseguests at a disadvantage, but it also was a major failure for the entire twist. It's hard to "expect the unexpected" every week when you know Elissa will become the MVP yet again. Eventually, Big Brother decided to just name America the MVP for a few weeks and have viewers nominate a third houseguest before getting rid of the twist altogether by week seven.

At least "Team America" this year has more potential for keeping things fresh in the Big Brother house. Once the three secret alliance members are chosen, that's the end of voting for an actual houseguest for the privilege, and every week, the tasks the alliance has to complete will change. It's not like any one houseguest will repeatedly have an unfair advantage over the others. Well, unless you count getting to go on secret missions at America's command every week a privilege.

In fact, being voted into this secret alliance may be more of a curse than a blessing. It's just one more thing to factor into your game that has the potential to be revealed to the other houseguests. And believe me, if you think I'm bitter about there not being a level playing field with the "Team America Vote," the houseguests not invited to this secret alliance party are going to be gunning for whoever is.