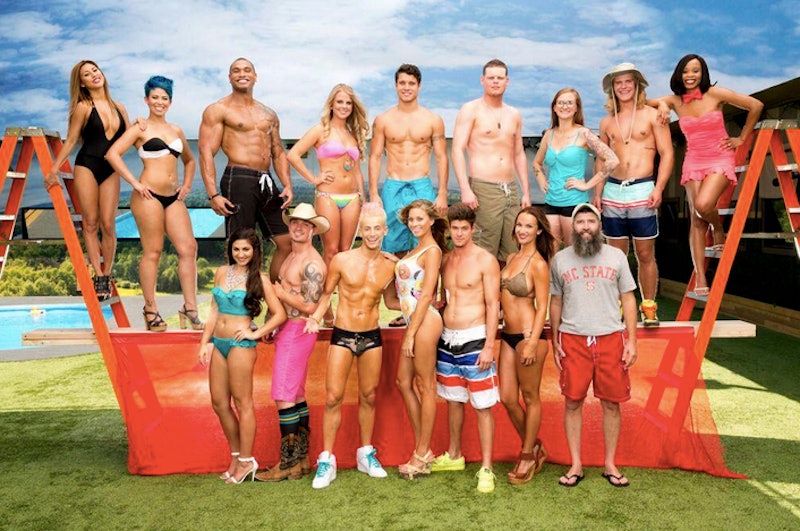 During the Season 16 premiere of Big Brother , host Julie Chen dropped the "twisted bomb" on the first eight houseguests that not only will there be two HoHs each week this summer, but those HoHs will each nominate two houseguest. On top of that, only "one HoH will be left standing." Everyone, especially the very anxious HoH Frankie, was dumbfounded. (Dumb being the operative word when it comes to Big Brother.) But, twist, they didn't even hear the biggest twist of the night! Nope, that bomb was dropped on the viewers at home who learned about this year's Team America? F**k yeah?! F**k no.

Here's how it works: Big Brother fans will log on to CBS.com and vote for a houseguest that will be part of a seeeeeecret three-person alliance. Throughout the summer these three will be sent on seeeeeeecret missions "that will change the course of the game." And it's all controlled by the viewers, upsetting the delicate balance of the complete lunacy and paranoia that naturally unfolds in the household. But, whatever, dance, puppets, dance! (Puppets? Team America! This all makes perfect sense!)

The first member of the secret society (which better come up with a cooler name than El Quatro or the Crazy Eights, dammit) will be revealed on the second part of the premiere on Thursday night. If Twitter is any indication of the way America feels about the first eight houseguests so far, Cody and his abs or Devin and his abs pretty much have this thing in the bag. For the love of all that is good, let's hope Team America doesn't pick Frankie. He's already having a full-fledged meltdown about being HoH and keeping the identity of his famous sister to himself.