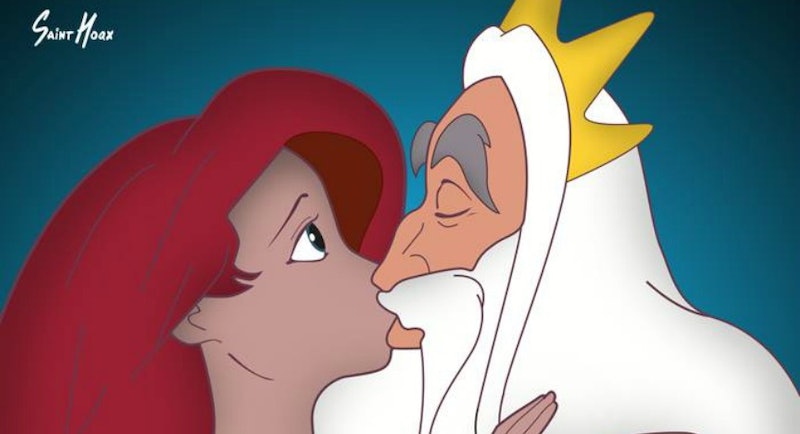 I’m sure I’m not alone when I say that I have a complicated relationship with Disney and the Disney princesses. A part of me loves the whole shebang — the characters, the movies I grew up with, even the theme parks — and always will; at the same time, though, I also recognize that they don’t always send the best messages, both to kids and adults. It’s this ambivalence that pseudonymous Middle Eastern artist Saint Hoax taps into in his latest work, a poster series called “ Princest Diaries.” Are the images shocking? Yes — but that’s the point. They draw attention to an issue that (as George Will’s awful and inaccurate column proved) we still need to talk about: Rape awareness and sexual abuse.

According to Hoax’s website, “ Princest Diaries” is “an awareness campaign targeting minors who have been subject to sexual abuse by a family member. The aim of the poster series is to encourage victims to report their cases in order for the authorities to prevent it from happening again.” The images depict Jasmin, Ariel, and Aurora locked in a clearly unwanted kiss with their fathers; written across the bottom of each one is, “46 percent of minors who are raped are victims of family members. It’s never too late to report your attack.”

When Hoax found out recently that one of his closest friends had been raped by her father at the age of seven, he knew she had to do something about it. He wrote in an email to the Huffington Post, “That story shocked me to my core. As an artist/activist I decided to shed light on that topic again in a new form. I used Disney princess [sic] because it’s a visual language that my target audience would be attracted to.”

Reactions across the Internet have been wide and varied; some have praised them, while others have condemned them. I think, though, that Dov Sherman nailed exactly why the posters are so effective in a comment on Jezebel:

“Choosing Disney princesses for this campaign actually makes a lot of sense. Saint Hoax was right — if you’re trying to warn minors about rape, Disney princesses are a very effective way to get their attention. Because of the familiarity of the characters (in both senses of the word), these images are creepy and uncomfortable, which is exactly what they need to be.”

A lot of the negative reactions to the posters have focused on how they take something sweet and innocent and twist them into something disturbing, “ruining childhood” in the process — but Sherman is absolutely right. They’re meant to be uncomfortable. They have to be uncomfortable, because that’s the only way to get their point across. We can’t just stick our fingers in our ears and go “LA LA LA I CAN’T HEAR YOU” at things we don’t like to think about — whether it’s these posters themselves, or rape or sexual abuse themselves.

Head on over to Saint Hoax’s website to see the whole “Princest Diaries” series.

If you or someone you know has been the victim of rape, reach out for help via the National Sexual Assault Hotline: 1.800.656.HOPE.