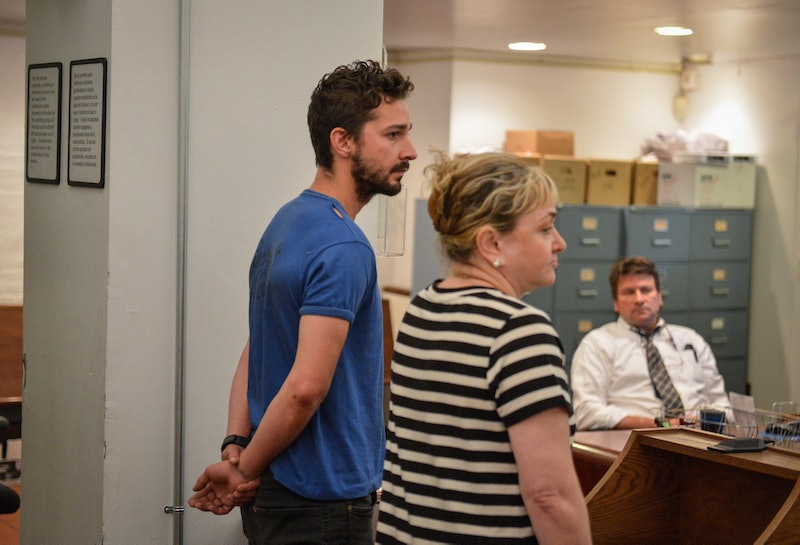 In case you haven't heard, Shia LaBeouf was arrested Thursday night during the Cabaret show for causing a ruckus and generally being a huge jerk. Although LaBeouf has since been released, more and more information is coming forward about his behavior, which was evidently erratic long before he ever took his seat at Studio 54. Since a lot of the reporting is relying on the word of witnesses, there are plenty of places in which the story conflicts with itself. However, the generally important thing to know is that Shia LaBeouf is in trouble — again.

This isn't the first time that LaBeouf has run into legal troubles, but it is the most bizarre time. Then again, perhaps we shouldn't have been surprised. This is the celebrity who wears a bag over his head stating that he's not famous anymore. Although it will be nearly impossible to fully understand everything that happened last night, or even to fully know everything that happened last night, we gathered as many different reports as possible to give everyone a general sketch.

Afternoon — A few hours before the Cabaret show, witnesses reported seeing Shia LaBeouf chasing a homeless man out on the street. Although initially some witnesses claimed to the New York Post that the homeless man had a bag of McDonalds French fries that LaBeouf really, really wanted that badly, TMZ photographs revealed that the homeless man actually had a hat that LaBeouf was trying to retrieve. Witnesses also told TMZ that Shia seemed strung out on something.

Evening — Prior to the start of the show, LaBeouf was seen hanging out with the crowd at Studio 54. According to CNN, eye witnesses reported that LaBeouf fed a woman a strawberry from her own plate at the theater bar and tipped the bartender. He was also smoking a cigarette during this time.

8 P.M. — Cabaret Act I begins. The Hollywood Reporter obtained a criminal complaint that LaBeouf stood up in the middle of the show and began to yell at the actors on stage. He was also said in a US Weekly report to have been hitting people on the behind and in the back of the head. LaBeouf was asked to leave by security, but he refused. The police were eventually called.

9 P.M. — During intermission, Shia LaBeouf was escorted out of Studio 54 by security, screaming obscenities along the way. The police officers took him away in handcuffs and witnesses stated that LaBeouf was crying. One person took an Instagram photo of LaBeouf as the police whisked him away to the Midtown North Precinct.

9:30 P.M. — According to Google Maps, it's a four minute car ride from Studio 54 to the Midtown North Precinct, but reports differ on whether LaBeouf was arrested at 9 P.M. or closer to 9:30 P.M. Either way, upon reaching the precinct, LaBeouf began to demand that he be released from the handcuffs and threatened the police ("F**k you! I'll f**k you up!"). When he started spitting at them, the police outfitted him with a face mask.

10 P.M. to 11 P.M. — LaBeouf is officially charged with two counts of disorderly conduct and one count of criminal trespassing, which was reported by ABC Correspondent Aaron Katersky via Twitter at 10:57 P.M.

Overnight — Other bizarre and terrifying behavior from LaBeouf ensues. Page Six reports that LaBeouf threatened to ruin an officer's career and before calling him a homophobic slur. According to the Daily News, LaBeouf also started doing push-ups while he ignored the officers' attempts to get him to calm down. LaBeouf was held in jail overnight and Aaron Katersky confirmed over Twitter that LaBeouf was also charged with one count of harassment.

10 A.M.— E! News reports that at this time LaBeouf was released from Midtown Community Court and walked straight to his hotel without speaking to any reporters. His next court date is set for July 24. A representative for LaBeouf has yet to comment on the incident.

Now — As new and horrifying details continue to come to light about LaBeouf's behavior, we can only wonder if this incident is proof that Shia LaBeouf is having a mental breakdown. If it is, we can only pray that he gets the help that he needs to make it through such a difficult time. If it's not, then we can only hope that LaBeouf's antics doesn't turn him into the next Justin Bieber.

More like this
Dr. Anna Pou Is Still Practicing Medicine After Facing Murder Charges
By Brad Witter
Chloe Pirrie Is Ready To Take The Next Step
By Sam Ramsden
7 Things We Learned From Rebekah Vardy's First Post-WAGatha Christie Interview
By Sam Ramsden
'Children of the Underground' Subject Faye Yager Now Runs A North Carolina B&B
By Brad Witter
Get Even More From Bustle — Sign Up For The Newsletter