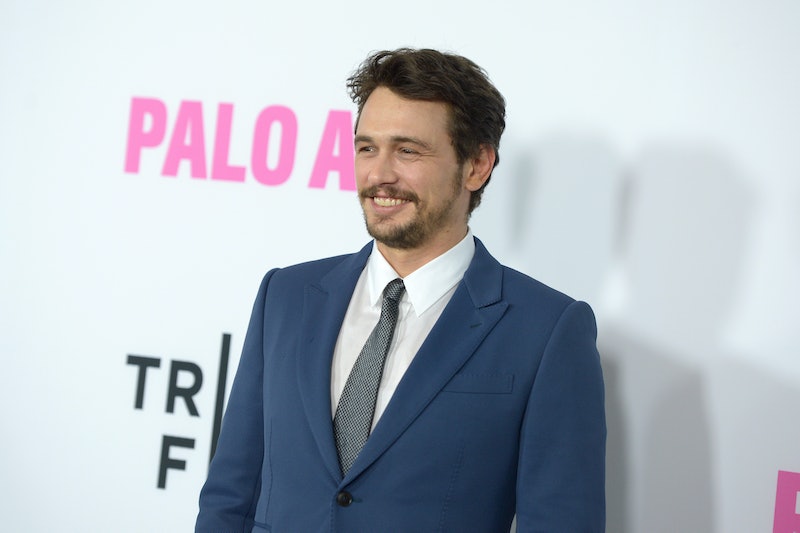 In mid June, James Franco posted an Instagram pic that sent a different message from his usual shirtless selfie. Instead of alerting his followers of his bedtime routine, the photo announced he was adding a new trade to his ever-growing list of titles. He is now an online educator, or as he phrased it on Instagram (next to a very armpit-heavy selfie): "SIGN UP FOR ONLINE SCREENWRITING CLASS with ME! NOT EXPENSIVE AT ALL!!!!!!" Naturally, I was curious as hell, and figuring I could learn something, I signed up without much hesitation.

But, of course, I was slightly concerned: Would this be about screenwriting or would it be about James Franco teaching you screenwriting. You know the difference. Franco loves creating, but the only thing he loves more than creating is the fact that he's the one who's doing the creating.

But hey, for 25 bucks, which adds up to two good cocktails worth of information, Franco's introductory course in the art of screenwriting sounded like fun. It's 15 video lessons ranging in length from approximately four to nine minutes, no real syllabus or notes, and no time schedule, so I knew it would be super relaxed. I could press pause whenever I wanted during my screenwriting exploration with Professor Franco, and no one would ever know. I could keep my tally of snack breaks to myself!

After registering and paying, I clicked "begin" and my screenwriting journey with James Franco began. Here's what I gathered from the experience...

Okay, that's not what happened. Here's what I actually gleaned.

An Online Class Is A Cool Idea

Not everyone can afford to take classes in-person, nor is everyone based in L.A. Online education is becoming more and more prevalent these days, so kudos to Franco for his generosity. Franco put it best himself, when he spoke to Forbes:

I like that anyone can take the online class, I want to be able to teach people who have passion for filmmaking but can’t got to the best film schools.

You hear that? ANYONE can take the class! ANYONE! Even you, my friend.

The class is composed of 15 short videos, each with a different lesson. There have been — and there are — YouTube channels specifically dedicated to doling out nuggets of education. At 25 bucks for the course, and with thousands of students, who do you think is gaining?

But nonetheless, there are perks. For instance, in a video setting, you can watch the content and over again, and thereby, really enforce what you learn. You couldn't get that in a regular class. I'll drink a $12 cocktail to that!

An intro level sample writing class would run you way more than that in NYC. Like I said, the worth of two cocktails.

And, And — It's James Franco! How Cool Is That?

It's very cool, my friend, The Young Aspiring Screenwriter. But here's the other thing — it's only, like, 50 percent cool — because he's only on screen for 50 percent of the time. You have Professor Franco as your Very Esteemed Lecturer for the first couple of videos, and then he hands the mic on over to his frequent collaborator, Vince Jolivette.

Now, for someone genuinely interested in hearing different perspectives on introductory screenwriting, then that's not a bad thing whatsoever, but for someone who signed on solely to hear Franco talk about screenwriting — then it's a bit of a let down.

Franco Has Some Solid Thoughts

The class offers a very solid introductory video about screenwriting. Franco has some bits of wisdom for writers, some that even sound surprising coming from him (ie: he mentions that writers should trust the people with whom they're working, and not try to impede on designers and actors with their written words). His short lectures — as well as Jolivette's — provide some interesting insight into beginner-level screenwriting.

You learn basic terminology, as well as the ins and outs of production. The two discuss important components of filmmaking like budgeting your production, and taking your script to producers with a logline, a treatment, and a pitch. If you were the Jon Snow of screenwriting (ie: you knew nothing) then that information will certainly mitigate your lack of knowledge.

You Ready For Some Art, Son?

Franco "assigns" three choices for inspiration: Edgar Lee Masters's The Spoon River Anthology, Sherwood Anderson's Winesburg, Ohio: A Group of Tales in Ohio Small-Town Life, and John Steinbeck's The Pastures of Heaven. You must adapt a poem or excerpt from these source texts into an eight minute screenplay. Franco's point is that by doing so, you'll find a character whose journey an audience would truly want to follow. Franco's all about creating characters.

But There's No Franco Feedback

With THOUSANDS of e-students, you can't expect him to critique every single person's screenplay, can you? If you're looking for feedback, you'll be conversing with the students in the class via a "discussions" tab — there are over 100 "discussions" going on at a time. That provides a workshop mentality, but it's disappointing if you were vying for an A from James Franco. However...

He Inadvertently Fostered An Internet Community

And the online network is probably the coolest thing about an e-class. It makes an Internet community of people who might not have been discussing screenwriting otherwise. The "discussions" tab functions as a community facilitator, as it features a whole variety of conversations, such as favorite screenplays, the importance of developing a thick skin in the industry, resources for finding short films online, motivational E-speeches (persistence! NEVER GIVE UP!), and helpful tips from other writers.

It's totally voluntary, but students who choose to participate in any of these conversations have the opportunity to digitally meet other likeminded individuals — or differently minded individuals, who thereby help them expand as screenwriters. If you're starting a conversation in an educational setting, it's likely not going to be a conversation that's filled with haters. The "discussions" tab is probably the most admirable thing that Franco did with this class.

He Should Keep At It

As in, he should offer more intermediate and advanced level classes. Why not keep this Internet discussion going, or create an even bigger conversation that involves more advanced techniques? What about setting the enrollment at a smaller number so that Franco can potentially communicate with a few of the students?

I Don't Like Him Any More Or Any Less

He's still James Franco, Wearer of Many Hats, to me. I still find him to be an incredibly interesting figure in the industry, albeit a perplexing one. I tip my hat to his talent and his love of the arts; I roll my eyes at other things. But most of all...

I Want A Lesson in Paint Shop

More like this
Your Guide To Watching 'Everything Everywhere All At Once' In The UK
By El Hunt and Sophie McEvoy
Austin Butler Confirms Vanessa Hudgens Pushed Him To Do 'Elvis'
By Alyssa Lapid
Theo James Would “Love” To Star In George Michael Biopic
By Sam Ramsden
Adam Lambert Called Out The George Michael Biopic Over Potential Casting
By Sam Ramsden
Get Even More From Bustle — Sign Up For The Newsletter
From hair trends to relationship advice, our daily newsletter has everything you need to sound like a person who’s on TikTok, even if you aren’t.