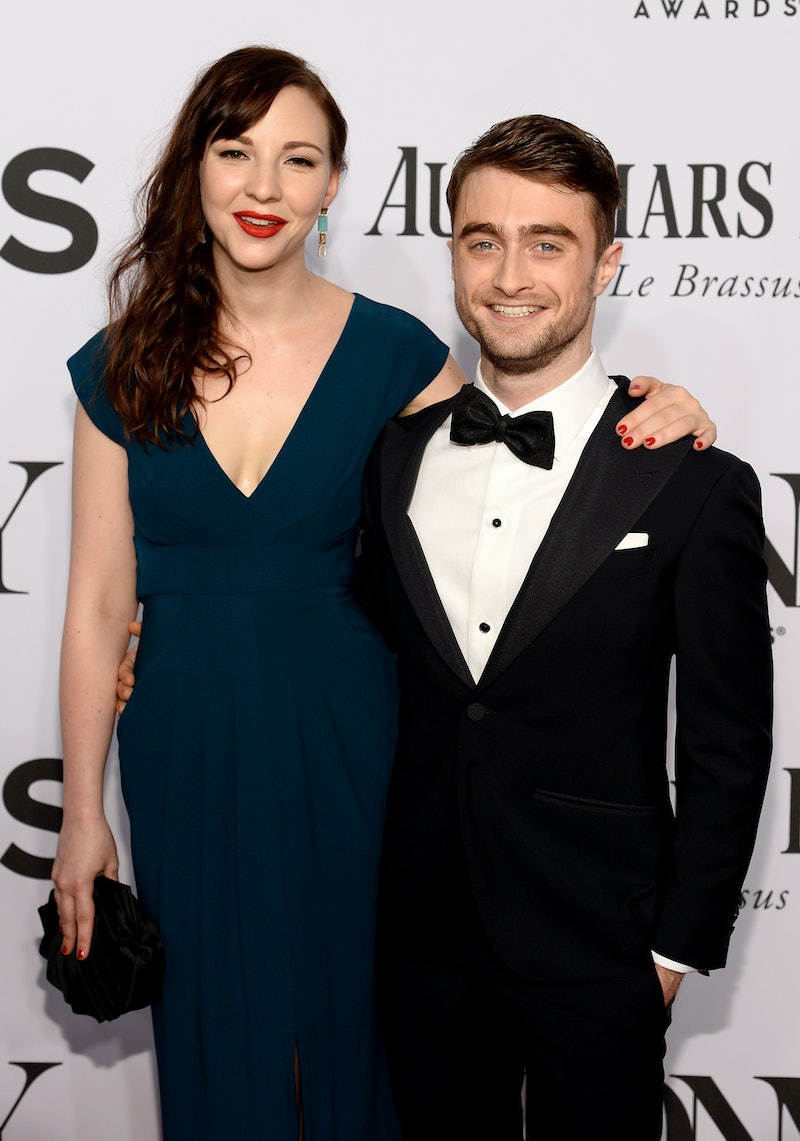 As you may know if you're a Daniel Radcliffe fan, ol' Raddy is dating the lovely lady pictured above. Her name is Erin Darke, she's an actress and casting assistant, and she has been dating Radcliffe for two years. Of course, this leads to the question: How does one just meet Harry Potter and start dating him? I know, I know. He's not really Harry Potter, and it probably sucks to have to forever live with that close association, but I imagine for anyone who dates Daniel Radcliffe, there's a moment where you go, "Holy shit. My boyfriend is Harry Potter." (At least, I would.) So how did Daniel Radcliffe and Erin Darke meet in the first place? It wasn't because she was a massive fangirl who stood outside an HP premiere, like in your eighth-grade fantasy.

While we know how they met — or at least, we think we know, since they're very sneaky — there isn't much other info available about their relationship. Radcliffe once told Andy Cohen during an interview, "Yes, I am dating someone. And my type is … the type I keep private." Still, we were able to gather a bit of insight into this couple.

Here's a timeline of Daniel Radcliffe and Erin Darke's relationship based on what we do know:

Nov. 16, 2001 — Harry Potter and the Sorcerer's Stone is released. Erin Darke probably doesn't care, because she's 17 at the time and soooo over Harry Potter. Darke is five years older than Radcliffe, and with them now being 24 and 29, that isn't a huge difference, but it is big when you're 12 and 17. I think I now understand why Radcliffe has a thing for older women — they aren't harboring the remains of childhood crushes.

Sometime in 2012 — Darke and Radcliffe start dating. In April of 2014, it was confirmed by Darke's rep that she'd been dating Radcliffe for two years. Did they come out and say, "Our anniversary is May 22nd! Please view our registry online to send gifts?" No, of course not.

Jan. 18, 2013 — Kill Your Darlings premieres at Sundance. Darke and Radcliffe, who have been already dating about a year at this point, even though know one knew it, are spotted flirting at a film festival event. According to a source who spoke with Us Weekly, "They were affectionate most of the night. [Darke] was touching his knee. They were a little more obvious outside the venue after they were leaving."

Aug. 2013 — Darke attends a showing of Radcliffe's play The Cripple of Inishmann. Or at least, they leave in a car together following the performance. Sneeeeeaaky.

Sept. 30, 2013 — Radcliffe and Darke attend the Cinema Society screening of Kill Your Darlings and pose for photos with another person between them to dispel any suspicions of a possible relationship:

Oct. 16, 2013 — Kill Your Darlings premieres in the U.S. Radcliffe and Darke probably go see it, and no one notices because they wear hoodies or something. ("Or something" meaning "invisibility cloaks," of course.)

April 2014 — Darke and Radcliffe visit a British grocery store in New York City and are snapped by paparazzi. They bought food and went and sat in the park like it was nothing. Harry Potter chillin' in the park! And no one knew because he had on sunglasses and a cap! This is a crazy world we live in.

May 7, 2014 — Star magazine reports that Radcliffe and Darke are engaged, that they are headed to Paris to find "the perfect engagement ring," that Rupert "Ron" Grint is going to be best man at the wedding, that it will take place on Lake Michigan, and that Emma "Hermione" Watson has already RSVP'd. For a couple that doesn't give much info to the media, they inspired the most ridiculous celebrity engagement report that has ever existed.

May 16, 2014 — Radcliffe tells The Daily Beast that he isn't engaged, calls the report "absolute bullocks," and says that a former teacher believed it was real and texted him congratulations. He explains, "I had to text her back, ‘I’m afraid not! We’re very happy, but we’re not getting married.’ Marriage is not a thought that is even remotely close to me at the moment."

June 2014 — Darke and Radcliffe attend the Tony Awards together, and everyone is all, "Oh snap! Look at them being public about their relationship" even though really everyone should be like, "Look at them only occasionally attending formal events together and, I assume, doing really normal, boring stuff the rest of the time, like a regular couple."

Way to go, you two! This is how a celebrity relationship is done — acting totally cool and giving so little information that the media can only make crazy speculations every once in a while.