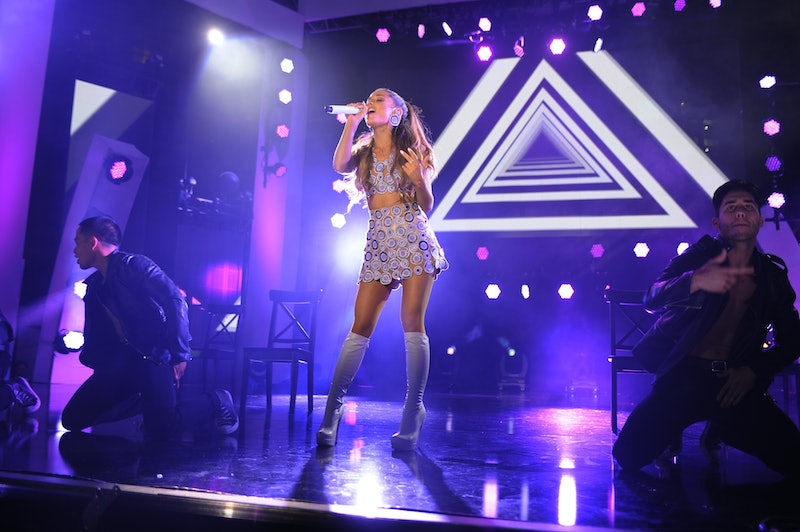 It was a good weekend to be an Arianator. On Saturday, pop starlet Ariana Grande revealed a ton of new information about her upcoming sophomore album, as well as about her second single, “Break Free.” Basically, if you like “Problem” (and who doesn’t?), get ready to hear a whole lot more amazing pop music from Grande. Oh yes, it’s time to get excited.

Firstly, Grande’s new album is called My Everything and it will be released on August 25. That’s so soon! That’s, like, practically tomorrow. Additionally, if you pre-order My Everything through arianagrande.com, you will be granted exclusive access to a stream of Grande’s performance at the iHeartRadio Ultimate Pool Party in Miami Beach, where she recently premiered some new songs. How exciting!

...But it’s also a little confusing. Grande’s iHeartRadio performance happened on Friday, so, like, did everyone in the audience forget their phones? Why haven’t any videos surfaced online yet? Were phones not allowed? Or was everybody just carrying their Jitterbug that day? I can’t say for certain. All I know is that I’m very excited to have the opportunity to hear Grande’s new material before the album is released.

Secondly, Grande unveiled the cover for My Everything and it’s really simple and good and not a complete and total disaster like the original cover of Yours Truly. Yes, Ari!

Thirdly, in an interview with Ryan Seacrest just before her iHeartRadio gig on Friday, Grande said that one of her favorite songs on the album is called, “Best Mistake,” and it features her buddy, rapper Big Sean. Grande previously collaborated with Big Sean on “Right There,” a track that appeared on her debut. He also provided the sexy whispering that can be heard on “Problem’s” chorus. Grande and Big Sean have great chemistry together, so this is very good news.

Fourthly, Grande teased the music video for her “Break Free” on Instagram, and it looks awesome and the song sounds awesome and everything is just awesomely awesome. Awesome. Also, during her aforementioned interview with Seacrest, Grande confirmed that the futuristic video was in fact inspired by Jane Fonda’s 1968 sci-fi flick, Barbarella. She described the video’s aesthetic as “throwback” and “campy.” Those are, like, two of my favorite words.

Fifthly, and this one’s for the music nerds out there, not only was “Break Free” produced by Zedd, it was also co-written by Max Martin and Savan Kotecha — two of the masterminds behind “Problem.” Grande is coming for her first number-one hit, y’all!

To give you an idea of what’s possible when Zedd, Martin, and Kotecha team up, the trio last worked together on Justin Bieber’s “Beauty and a Beat.” Don’t laugh! “Beauty and a Beat” is a pure pop delight AND it was a major radio hit, peaking at number five on the Billboard Hot 100 chart. I foresee great things for “Break Free."

Well, that just about wraps up our Grande music news update! “Break Free” will premiere on Wednesday this week. I’m pumped.

More like this
Everything To Know About Beyoncé's New Album
By El Hunt and Radhika Menon
Christina Perri Reacts To Her 'Twilight' Song Being One Of YouTube's Most-Viewed Ever
By Radhika Menon
Britney Spears Is About To Make Her Music Comeback With Elton John
By Jake Viswanath
Beyoncé Is The First Woman To Have A No. 1 Album Since Adele Did Almost A Year Ago
By Radhika Menon
Get Even More From Bustle — Sign Up For The Newsletter